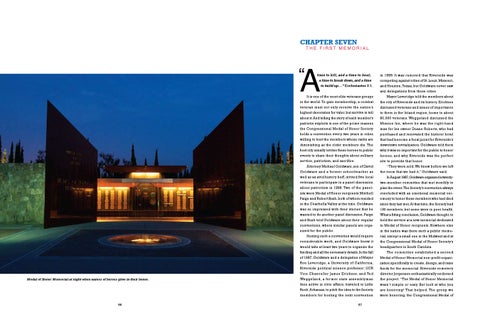 Medal of Honor Memorial at night when names of heroes glow in their honor.

It is one of the most elite veterans groups in the world. To gain membership, a combat veteran must not only receive the nation’s highest decoration for valor, but survive to tell about it. And telling the story of each member’s patriotic exploits is one of the prime reasons the Congressional Medal of Honor Society holds a convention every two years in cities willing to host the members whose ranks are diminishing as the older members die. The host city usually invites these heroes to public events to share their thoughts about military service, patriotism, and sacrifice. Attorney Michael Goldware, son of David Goldware and a former schoolteacher as well as an avid history buff, invited five local veterans to participate in a panel discussion about patriotism in 1996. Two of the panelists were Medal of Honor recipients Mitchell Paige and Robert Bush, both of whom resided in the Coachella Valley at the time. Goldware was so impressed with their stories that he wanted to do another panel discussion. Paige and Bush told Goldware about their regular conventions, where similar panels are organized for the public. Hosting such a convention would require considerable work, and Goldware knew it would take at least two years to organize the funding and all the necessary details. In the fall of 1997, Goldware and a delegation of Mayor Ron Loveridge, a University of California, Riverside political science professor; UCR Vice Chancellor James Erickson; and Ted Weggeland, a former state assemblyman then active in civic affairs, traveled to Little Rock, Arkansas, to pitch the idea to the Society members for hosting the next convention 57

in 1999. It was rumored that Riverside was competing against cities of St. Louis, Missouri, and Houston, Texas, but Goldware never saw any delegations from those cities. Mayor Loveridge told the members about the city of Riverside and its history. Erickson discussed veterans and issues of importance to them in the Inland region, home to about 80,000 veterans. Weggeland discussed the Mission Inn, where he was the right-hand man for Inn owner Duane Roberts, who had purchased and renovated the historic hotel that had become a focal point for Riverside’s downtown revitalization. Goldware told them why it was so important for the public to honor heroes, and why Riverside was the perfect site to provide that honor. “They were sold.We knew before we left the room that we had it,” Goldware said. In August 1997,Goldware organized a twentytwo-member committee that met monthly to plan the event.The Society’s convention always concluded with an emotional memorial ceremony to honor those members who had died since they last met. At that time, the Society had 150 members, but some were in poor health. What a fitting conclusion, Goldware thought, to hold the service at a new memorial dedicated to Medal of Honor recipients. Nowhere else in the nation was there such a public memorial, except a small one in the Midwest and at the Congressional Medal of Honor Society’s headquarters in South Carolina. The committee established a second Medal of Honor Memorial non-profit organization specifically to create, design, and raise funds for the memorial. Riverside cemetery director Jorgensen enthusiastically endorsed the project. “The Medal of Honor Memorial wasn’t simple or easy. But look at who you are honoring! That helped. The group we were honoring, the Congressional Medal of