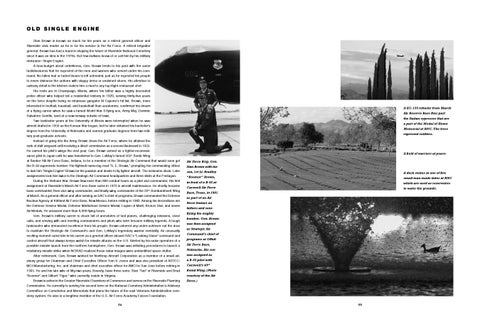 O l d S i n g l e En g i n e Stan Brown is known as much for his years as a retired general officer and Riverside civic leader as he is for his service in the Air Force. A retired brigadier general, Brown has had a hand in shaping the future of Riverside National Cemetery since it was an idea in the 1970s. But few civilians know of or call him by his military nickname: Single Engine. A fuss-budget about orderliness, Gen. Brown tends to his yard with the same fastidiousness that he expected of the men and women who served under his command. No fallen leaf or faded bloom is left untended, just as he expected his people to never dishonor the uniform with sloppy dress or unshined shoes. His attention to culinary detail in the kitchen makes him a rival to any top-flight restaurant chef. His roots are in Champaign, Illinois, where his father was a highly decorated police officer who helped foil a residential robbery in 1929, serving thirty-five years on the force despite being on infamous gangster Al Capone’s hit list. Brown, more interested in football, baseball, and basketball than academics, confirmed his dream of a flying career when he saw a famed World War II flying ace, Army Maj. Dominic Salvatore Gentile, land at a new runway outside of town. Two lackluster years at the University of Illinois were interrupted when he was almost drafted in 1950 as the Korean War began, but he later obtained his bachelor’s degree from the University of Nebraska and earned graduate degrees from two military post-graduate schools. Instead of going into the Army, Brown chose the Air Force, where he attained the rank of staff sergeant until receiving a direct commission as a second lieutenant in 1953. He earned his pilot’s wings the next year. Gen. Brown served as a fighter-reconnaissance pilot in Japan until he was transferred to Gen. LeMay’s famed 305th Bomb Wing at Bunker Hill Air Force Base, Indiana, to be a member of the Strategic Air Command that would soon get the B-58 supersonic bomber. His flightsuit name-tag read “S. E. Brown,” prompting his commanding officer to dub him “Single Engine” Brown for his passion and desire to fly fighter aircraft. The nickname stuck. Later assignments took him twice to the Strategic Air Command headquarters and three stints at the Pentagon. During the Vietnam War, Brown flew more than 800 combat hours as a pilot and commander. His first assignment at Riverside’s March Air Force Base came in 1973 in aircraft maintenance. He shortly became base commander, then vice wing commander, and finally wing commander of the 22nd Bombardment Wing at March. As a general officer and after serving as SAC’s chief of programs, Brown commanded the Defense Nuclear Agency at Kirtland Air Force Base, New Mexico, before retiring in 1983. Among his decorations are the Defense Service Medal, Defense Meritorious Service Medal, Legion of Merit, Bronze Star, and seven Air Medals. He amassed more than 6,000 flying hours. Gen. Brown’s military career is chock full of anecdotes of fast planes, challenging missions, close calls, and serving with and meeting commanders and pilots who later became military legends. A tough taskmaster who demanded excellence from his people, Brown ushered any under-achiever out the door to maintain the Strategic Air Command’s and Gen. LeMay’s legendary warrior mentality. An unusually exciting moment came late in his career as a general officer aboard SAC’s “Looking Glass” command and control aircraft that always keeps watch for missile attacks on the U.S. Alerted by his radar operators of a possible missile launch from the northern hemisphere, Gen. Brown was initiating procedures to launch a retaliatory missile strike when NORAD realized those radar images were unidentified space clutter. After retirement, Gen. Brown worked for Northrop Aircraft Corporation as a member of a small advisory group for Chairman and Chief Executive Officer Tom V. Jones and was vice president of ASTEC/ MCI Manufacturing, Inc. and chairman and chief executive officer for AMCI in San Jose before retiring in 1995. He and his late wife of fifty-two years, Beverly, have three sons: Stan “Tad” of Riverside and Brad “Boomer” and Gilbert “Tiger,” who currently reside in Virginia. Brown is active in the Greater Riverside Chambers of Commerce and serves on the Riverside Planning Commission. He currently is serving his second term on the National Cemetery Administration’s Advisory Committee on Cemeteries and Memorials that plans the future of the vast Veterans Administration cemetery system. He also is a longtime member of the U.S. Air Force Academy Falcon Foundation. 54

A KC-135 refueler from March Air Reserve Base flies past the Italian cypresses that are a part of the Medal of Honor Memorial at RNC. The trees represent soldiers.

A duck swims in one of five

which are used as reservoires

to water the grounds.

Base, Texas, in 1981 as part of an Air Force feature on fathers and sons flying the mighty bomber. Gen. Brown was then assigned as Strategic Air Command’s chief of programs at Offutt Air Force Base, Nebraska. His son was assigned as a B-52 pilot with Carswell’s 43rd Bomb Wing. (Photo courtesy of the Air Force.)