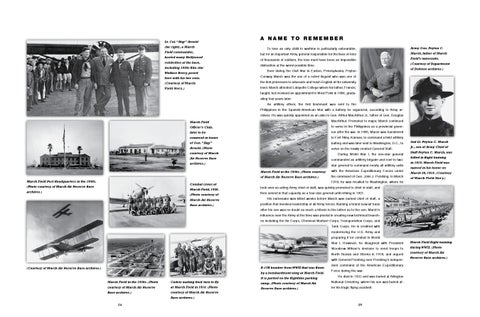 A Name to Remember To lose an only child in wartime is particularly unbearable,

of thousands of soldiers, the loss must have been an impossible

distraction at the worst possible time.

Born during the Civil War in Easton, Pennsylvania, Peyton Conway March was the son of a noted linguist who was one of the first professors to advocate and teach English at the university level. March attended Lafayette College where his father, Francis, taught, but received an appointment to West Point in 1884, graduating four years later. An artillery officer, the first lieutenant was sent to the Philippines in the Spanish-American War with a battery he organized, according to Army archives. He was quickly appointed as an aide to Gen. Arthur MacArthur Jr., father of Gen. Douglas MacArthur. Promoted to major, March continued

to serve in the Philippines as a provincial gover-

Officer’s Club, later to be

nor after the war. In 1903, March was transferred

to Fort Riley, Kansas, to command a field artillery

battery and was later sent to Washington, D.C., to

During World War I, the one-star general

commanded an artillery brigade and rose to two-

with the American Expeditionary Forces under the command of Gen. John J. Pershing. In March 1918, he was recalled to Washington, where he

took over as acting Army chief of staff, was quickly promoted to chief of staff, and then served in that capacity as a four-star general until retiring in 1921. His namesake was killed weeks before March was named chief of staff, a position that involves leadership of all Army forces. Naming a brand new air base after his son was no doubt as much a tribute to the father as to the son. March’s influence over the Army at the time was pivotal in creating new technical branches including the Air Corps, Chemical Warfare Corps, Transportation Corps, and Tank Corps. He is credited with modernizing the U.S. Army and preparing it for combat in World War I. However, he disagreed with President Woodrow Wilson’s decision to send troops to North Russia and Siberia in 1918, and argued with General Pershing over Pershing’s indepenB-17B bomber from WWII that was flown

by a bombardment wing at March Field. March Field in the 1920s. (Photo

Cadets waiting their turn to fly

It is parked on the flightline parking ramp. (Photo courtesy of March Air Reserve Base archives.)

dent command of the American Expeditionary Force during the war. He died in 1955 and was buried at Arlington National Cemetery, where his son was buried after his tragic flying accident.