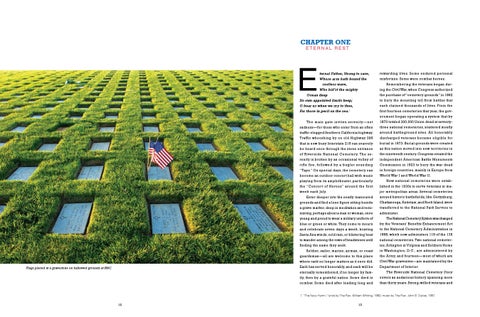 ternal Father, Strong to save, Whose arm hath bound the restless wave, Who bid’st the mighty Ocean deep Its own appointed limits keep; O hear us when we cry to thee, For those in peril on the sea.1 The main gate invites serenity—not sadness—for those who enter from an often traffic-clogged Southern California highway. Traffic whooshing by on old Highway 395 that is now busy Interstate 215 can scarcely be heard once through the stone entrance of Riverside National Cemetery. The serenity is broken by an occasional volley of rifle fire, followed by a bugler sounding “Taps.” On special days, the cemetery can become an outdoor concert hall with music playing from its amphitheater, particularly the “Concert of Heroes” around the first week each July. Enter deeper into the neatly manicured grounds and find a lone figure sitting beside a grave marker, deep in meditation and reminiscing, perhaps about a man or woman, once young and proud to wear a military uniform of blue or green or white. They come to mourn and celebrate seven days a week, braving Santa Ana winds, cold rain, or blistering heat to wander among the rows of headstones until finding the name they seek. Soldier, sailor, marine, airman, or coast guardsman—all are welcome to this place where rank no longer matters as it once did. Each has served honorably, and each will be eternally remembered, if no longer by family, then by a grateful nation. Some died in combat. Some died after leading long and

Flags placed at a gravestone on hallowed grounds at RNC.

rewarding lives. Some endured personal misfortune. Some were combat heroes. Remembering the veterans began during the Civil War, when Congress authorized the purchase of “cemetery grounds” in 1862 to bury the mounting toll from battles that each claimed thousands of lives. From the first fourteen cemeteries that year, the government began operating a system that by 1870 totaled 300,000 Union dead at seventythree national cemeteries, scattered mostly around battleground sites. All honorably discharged veterans became eligible for burial in 1873. Burial grounds were created as this nation moved into new territories in the nineteenth century. Congress created the independent American Battle Monuments Commission in 1923 to bury the war dead in foreign countries, mainly in Europe from World War I and World War II. New national cemeteries were established in the 1930s to serve veterans in major metropolitan areas. Several cemeteries around historic battlefields, like Gettysburg, Chattanooga, Antietam, and Rock Island, were transferred to the National Park Service to administer. The National Cemetery System was changed by the Veterans’ Benefits Enhancement Act to the National Cemetery Administration in 1998, which now administers 119 of the 135 national cemeteries. Two national cemeteries, Arlington in Virginia and Soldiers Home in Washington, D.C., are administered by the Army, and fourteen—most of which are Civil War gravesites—are maintained by the Department of Interior. The Riverside National Cemetery Story covers an audacious history spanning more than thirty years. Strong-willed veterans and