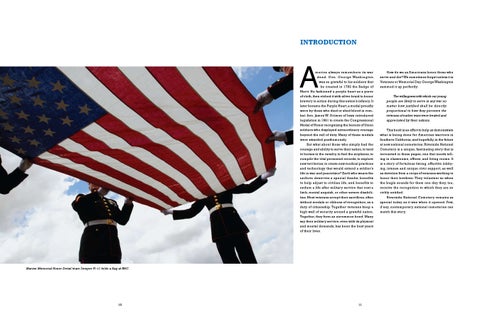 merica always remembers its war dead. Gen. George Washington was so grateful to his soldiers that he created in 1782 the Badge of Merit. He fashioned a purple heart as a piece of cloth, then etched it with silver braid to honor bravery in action during this nationâ&#x20AC;&#x2122;s infancy. It later became the Purple Heart, a medal proudly worn by those who died or shed blood in combat. Sen. James W. Grimes of Iowa introduced legislation in 1861 to create the Congressional Medal of Honor recognizing the heroics of Union soldiers who displayed extraordinary courage beyond the call of duty. Many of these medals were awarded posthumously. But what about those who simply had the courage and ability to serve their nation, to tend to horses in the cavalry, to fuel the airplanes, to compile the vital personnel records, to explore new territories, to create new medical practices and technology that would extend a soldierâ&#x20AC;&#x2122;s life in war and peacetime? Each who wears the uniform deserves a special thanks; benefits to help adjust to civilian life, and benefits to endure a life after military service that cost a limb, mental anguish, or other severe disabilities. Most veterans accept their sacrifices, often without medals or ribbons of recognition, as a duty of citizenship. Together veterans keep a high wall of security around a grateful nation. Together, they form an uncommon bond. Many say their military service, even with its physical and mental demands, has been the best years of their lives.

How do we as Americans honor those who serve and die? We sometimes forget unless it is Veterans or Memorial Day. George Washington summed it up perfectly: The willingness with which our young people are likely to serve in any war no matter how justified shall be directly proportional to how they perceive the veterans of earlier wars were treated and appreciated by their nations. This book is an effort to help us demonstrate what is being done for American warriors in Southern California, and hopefully, in the future at new national cemeteries. Riverside National Cemetery is a unique, fascinating story that is recounted in these pages, one that needs telling in classrooms, offices, and living rooms. It is a story of fortuitous timing, effective lobbying, intense and unique civic support, as well as devotion from a corps of veterans working to honor their brethren. They volunteer so when the bugle sounds for them one day they, too, receive the recognition to which they are so richly entitled. Riverside National Cemetery remains as special today as it was when it opened. Few, if any, contemporary national cemeteries can match this story.