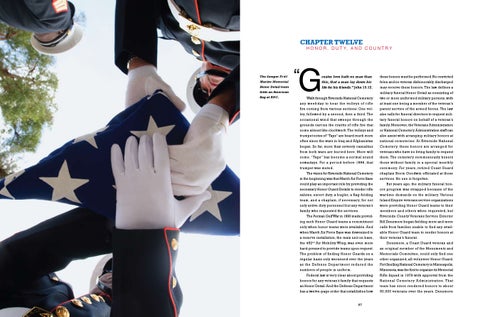 reater love hath no man than this, that a man lay down his life for his friends.” John 15:12.

Walk through Riverside National Cemetery any weekday to hear the volleys of rifle fire coming from various sections. One volley, followed by a second, then a third. The occasional wind that sweeps through the grounds carries the cracks of rifle fire that come almost like clockwork. The volleys and trumpet notes of “Taps” are heard much more often since the wars in Iraq and Afghanistan began. So far, more than seventy casualties from both wars are buried here. More will come. “Taps” has become a normal sound nowadays. For a period before 1996, that trumpet was muted. The vision for Riverside National Cemetery in the beginning was that March Air Force Base could play an important role by providing the necessary Honor Guard Details to render rifle salutes, escort duty, a bugler, a flag-folding team, and a chaplain, if necessary, for not only active duty personnel but any veteran’s family who requested the services. The Persian Gulf War in 1990 made providing such Honor Guard teams a commitment only when honor teams were available. And when March Air Force Base was downsized to a reserve installation, the main unit on base, the 452nd Air Mobility Wing, was even more hard-pressed to provide teams upon request. The problem of finding Honor Guards on a regular basis only worsened over the years as the Defense Department reduced the numbers of people in uniform. Federal law is very clear about providing honors for any veteran’s family that requests an Honor Detail. And the Defense Department has a twelve-page order that establishes how 87

these honors must be performed. No convicted felon and no veteran dishonorably discharged may receive these honors. The law defines a military funeral Honor Detail as consisting of two or more uniformed military persons, with at least one being a member of the veteran’s parent service of the armed forces. The law also calls for funeral directors to request military funeral honors on behalf of a veteran’s family. Moreover, the Veterans Administration or National Cemetery Administration staff can also assist with arranging military honors at national cemeteries. At Riverside National Cemetery, these honors are arranged for veterans who have no living family to request them. The cemetery ceremoniously honors those without family in a special monthly ceremony. For years, retired Coast Guard chaplain Norm Goodwin officiated at those services. No one is forgotten. But years ago, the military funeral honors program was strapped because of the wartime demands on the military. Various Inland Empire veterans service organizations were providing Honor Guard teams to their members and others when requested, but Riverside County Veterans Service Director Bill Densmore began fielding more and more calls from families unable to find any available Honor Guard team to render honors at their veteran’s funeral. Densmore, a Coast Guard veteran and an original member of the Monuments and Memorials Committee, could only find one other organized, all-volunteer Honor Guard. Fort Snelling National Cemetery in Minneapolis, Minnesota, was the first to organize its Memorial Rifle Squad in 1979 with approval from the National Cemetery Administration. That team has since rendered honors to about 50,000 veterans over the years. Densmore