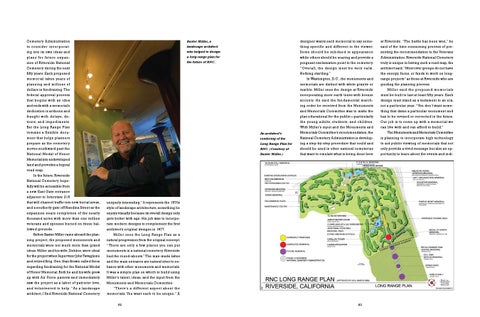 Cemetery Administration to consider incorporating into its own ideas and plans for future expansion of Riverside National Cemetery during the next fifty years. Each proposed memorial takes years of planning and millions of dollars in fundraising. The federal approval process that begins with an idea and ends with a memorial’s dedication is arduous and fraught with delays, detours, and impediments. But the Long Range Plan remains a flexible document that helps planners prepare as the cemetery moves southward past the National Medal of Honor Memorial into undeveloped land and provides a logical road map. In the future, Riverside National Cemetery hopefully will be accessible from a new East Gate entrance adjacent to Interstate 215 that will channel traffic into new burial areas, and a southerly gate off Nandina Street as the expansion nears completion of the nearly thousand acres with more than one million veterans and spouses buried on these hallowed grounds. Before Baxter Miller came aboard the planning project, the proposed monuments and memorials were not much more than grand ideas. Miller and his wife, Debbie, were ideal for the project when Supervisor John Tavaglione and retired Brig. Gen. Stan Brown called them regarding fundraising for the National Medal of Honor Memorial. Both he and his wife grew up with Air Force parents and immediately saw the project as a labor of patriotic love, and volunteered to help. “As a landscape architect, I find Riverside National Cemetery

Baxter Miller, a landscape architect who helped to design a long-range plan for the future of RNC.

An architect’s rendering of the Long Range Plan for RNC. (Courtesy of Baxter Miller.)

designer wants each memorial to say something specific and different to the viewer. Some should be subdued in appearance while others should be soaring and provide a poignant exclamation point to the cemetery. “Overall, the design must be very calm. Nothing startling.” In Washington, D.C., the monuments and memorials are distinct with white granite or marble. Miller sees the design at Riverside incorporating more earth tones with bronze accents. He said the fundamental marching order he received from the Monuments and Memorials Committee was to make the plan educational for the public—particularly the young adults, students, and children. With Miller’s input and the Monuments and Memorials Committee’s recommendation, the National Cemetery Administration is developing a step-by-step procedure that could and should be used in other national cemeteries that want to emulate what is being done here

uniquely interesting.” It represents the 1970s style of landscape architecture, something he enjoys visually because its overall design only gets better with age. His job was to incorporate modern designs to complement the first architect’s original designs in 1977. Miller sees the Long Range Plan as a natural progression from the original concept. “There are only a few places you can put monuments in a national cemetery. Riverside had the round-abouts.” The man-made lakes and the main entrance are natural sites to enhance with other monuments and memorials. It was a simple plan on which to build using Miller’s talent, ideas, and the input from the Monuments and Memorials Committee. “There’s a different aspect about the memorials. You want each to be unique.” A 82

at Riverside. “The battle has been won,” he said of the time-consuming process of presenting the recommendation to the Veterans Administration. Riverside National Cemetery truly is unique in having such a road map, the architect said.“Most civic groups do not have the energy, focus, or funds to work on longrange projects” as those at Riverside who are guiding the planning process. Miller said the proposed memorials must be built to last at least fifty years. Each design must stand as a testament to an era, not a particular year. “You don’t want something that dates a particular monument and has to be revised or corrected in the future. Our job is to come up with a memorial we can live with and can afford to build.” The Monuments and Memorials Committee is planning to incorporate high technology to aid public viewing of memorials that not only provide a vivid message but also an opportunity to learn about the events and indi-