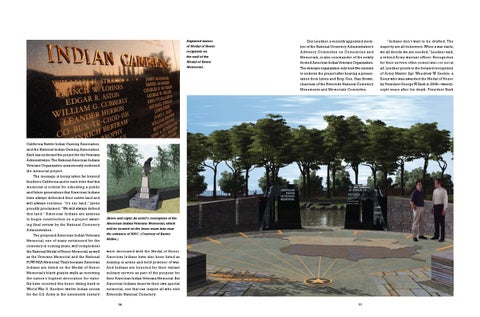 California Native Indian Gaming Association, and the National Indian Gaming Association. Each has endorsed the project for the Veterans Administration.The National American Indians Veterans Organization unanimously endorsed the memorial project. The message is being taken far beyond Southern California and to each tribe that this memorial is critical for educating a public and future generations that American Indians have always defended their native land and will always continue. “It’s our land,” Lyons proudly proclaimed.“We will always defend this land.” American Indians are anxious to begin construction on a project awaiting final review by the National Cemetery Administration. The proposed American Indian Veterans Memorial, one of many envisioned for the cemetery in coming years, will complement the National Medal of Honor Memorial, as well as the Veterans Memorial and the National POW/MIA Memorial.That’s because American Indians are listed on the Medal of Honor Memorial’s black granite walls as receiving the nation’s highest decoration for valor. Six have received this honor dating back to World War II. Another twelve Indian scouts for the U.S. Army in the nineteenth century

Don Loudner, a recently appointed member of the National Cemetery Administration’s Advisory Committee on Cemeteries and Memorials, is also commander of the newly formed American Indian Veterans Organization. The veterans organization only took five minutes to endorse the project after hearing a presentation from Lyons and Brig. Gen. Stan Brown, chairman of the Riverside National Cemetery Monuments and Memorials Committee.

Above and right: An artist’s conception of the American Indian Veterans Memorial, which will be located on the lower main lake near the entrance of RNC. (Courtesy of Baxter Miller.)

were decorated with the Medal of Honor. American Indians have also been listed as missing in action and held prisoner of war. And Indians are honored for their valiant military service as part of the purpose for their American Indian Veterans Memorial. But American Indians deserve their own special memorial, one that can inspire all who visit Riverside National Cemetery. 76

“Indians don’t wait to be drafted. The majority are all volunteers.When a war starts, we all decide we are needed,” Loudner said, a retired Army warrant officer. Recognition for their service often comes late—or not at all. Loudner points to the belated recognition of Army Master Sgt. Woodrow W. Keeble, a Sioux who was awarded the Medal of Honor by President George W. Bush in 2008—twentyeight years after his death. President Bush