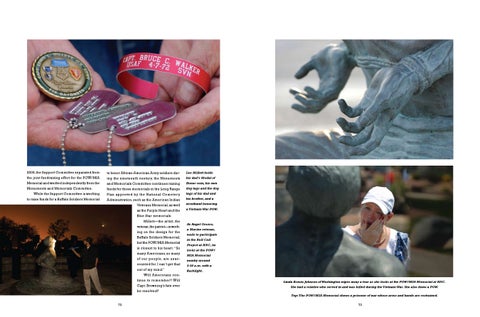 to honor African-American Army soldiers during the nineteenth century, the Monuments and Memorials Committee continues raising funds for those memorials in the Long Range Plan approved by the National Cemetery Administration, such as the American Indian Veterans Memorial, as well as the Purple Heart and the Blue Star memorials. Millett—the artist, the veteran,the patriot—is working on the design for the Buffalo Soldiers Memorial, but the POW/MIA Memorial is closest to his heart. “So many Americans, so many of our people, are unaccounted for. I can’t get that out of my mind.” Will Americans continue to remember? Will Capt. Browning’s fate ever be resolved?

Lee Millett holds his dad’s Medal of Honor coin, his own dog tags and the dog tags of his dad and his brother, and a wristband honoring a Vietnam War POW.