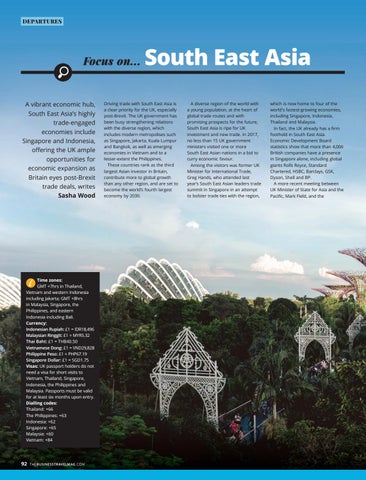 Driving trade with South East Asia is a clear priority for the UK, especially post-Brexit. The UK government has been busy strengthening relations with the diverse region, which includes modern metropolises such as Singapore, Jakarta, Kuala Lumpur and Bangkok, as well as emerging economies in Vietnam and to a lesser-extent the Philippines. These countries rank as the third largest Asian investor in Britain, contribute more to global growth than any other region, and are set to become the world’s fourth largest economy by 2030.

A diverse region of the world with a young population, at the heart of global trade routes and with promising prospects for the future, South East Asia is ripe for UK investment and new trade. In 2017, no less than 15 UK government ministers visited one or more South East Asian nations in a bid to curry economic favour. Among the visitors was former UK Minister for International Trade, Greg Hands, who attended last year’s South East Asian leaders trade summit in Singapore in an attempt to bolster trade ties with the region,

which is now home to four of the world's fastest-growing economies, including Singapore, Indonesia, Thailand and Malaysia. In fact, the UK already has a firm foothold in South East Asia. Economic Development Board statistics show that more than 4,000 British companies have a presence in Singapore alone, including global giants Rolls Royce, Standard Chartered, HSBC, Barclays, GSK, Dyson, Shell and BP. A more recent meeting between UK Minister of State for Asia and the Pacific, Mark Field, and the