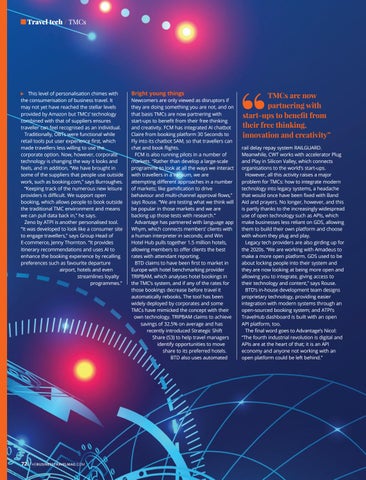 This level of personalisation chimes with the consumerisation of business travel. It may not yet have reached the stellar levels provided by Amazon but TMCs’ technology combined with that of suppliers ensures traveller can feel recognised as an individual. Traditionally, OBTs were functional while retail tools put user experience first, which made travellers less willing to use the corporate option. Now, however, corporate technology is changing the way it looks and feels, and in addition, “We have brought in some of the suppliers that people use outside work, such as booking.com,” says Burroughes. “Keeping track of the numerous new leisure providers is difficult. We support open booking, which allows people to book outside the traditional TMC environment and means we can pull data back in,” he says. Zeno by ATPI is another personalised tool. “It was developed to look like a consumer site to engage travellers,” says Group Head of E-commerce, Jenny Thornton. “It provides itinerary recommendations and uses AI to enhance the booking experience by recalling preferences such as favourite departure airport, hotels and even streamlines loyalty programmes.”

Newcomers are only viewed as disruptors if they are doing something you are not, and on that basis TMCs are now partnering with start-ups to benefit from their free thinking and creativity. FCM has integrated AI chatbot Claire from booking platform 30 Seconds to Fly into its chatbot SAM, so that travellers can chat and book flights. FCM is also running pilots in a number of markets. “Rather than develop a large-scale programme to look at all the ways we interact with travellers in a vacuum, we are attempting different approaches in a number of markets; like gamification to drive behaviour and multi-channel approval flows,” says Rouse. “We are testing what we think will be popular in those markets and we are backing up those tests with research.” Advantage has partnered with language app Whym, which connects members’ clients with a human interpreter in seconds; and Win Hotel Hub pulls together 1.5 million hotels, allowing members to offer clients the best rates with attendant reporting. BTD claims to have been first to market in Europe with hotel benchmarking provider TRIPBAM, which analyses hotel bookings in the TMC’s system, and if any of the rates for those bookings decrease before travel it automatically rebooks. The tool has been widely deployed by corporates and some TMCs have mimicked the concept with their own technology. TRIPBAM claims to achieve savings of 32.5% on average and has recently introduced Strategic Shift Share (S3) to help travel managers identify opportunities to move share to its preferred hotels. BTD also uses automated

TMCs are now partnering with start-ups to benefit from their free thinking, innovation and creativity” rail delay repay system RAILGUARD. Meanwhile, CWT works with accelerator Plug and Play in Silicon Valley, which connects organisations to the world’s start-ups. However, all this activity raises a major problem for TMCs: how to integrate modern technology into legacy systems, a headache that would once have been fixed with Band Aid and prayers. No longer, however, and this is partly thanks to the increasingly widespread use of open technology such as APIs, which make businesses less reliant on GDS, allowing them to build their own platform and choose with whom they plug and play. Legacy tech providers are also girding up for the 2020s. “We are working with Amadeus to make a more open platform. GDS used to be about locking people into their system and they are now looking at being more open and allowing you to integrate, giving access to their technology and content,” says Rouse. BTD’s in-house development team designs proprietary technology, providing easier integration with modern systems through an open-sourced booking system; and ATPI’s TravelHub dashboard is built with an open API platform, too. The final word goes to Advantage’s Nicol: “The fourth industrial revolution is digital and APIs are at the heart of that; it is an API economy and anyone not working with an open platform could be left behind.”