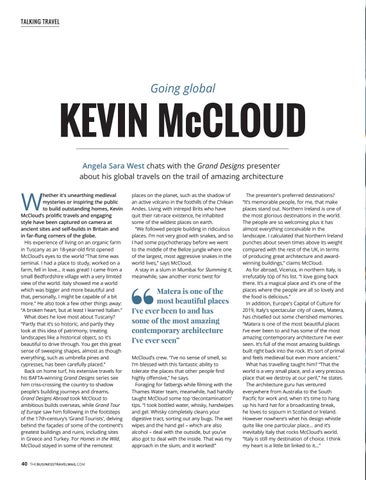 hether it's unearthing medieval mysteries or inspiring the public to build outstanding homes, Kevin McCloud’s prolific travels and engaging style have been captured on camera at ancient sites and self-builds in Britain and in far-flung corners of the globe. His experience of living on an organic farm in Tuscany as an 18-year-old first opened McCloud’s eyes to the world “That time was seminal. I had a place to study, worked on a farm, fell in love… it was great! I came from a small Bedfordshire village with a very limited view of the world. Italy showed me a world which was bigger and more beautiful and that, personally, I might be capable of a bit more.” He also took a few other things away: “A broken heart, but at least I learned Italian.” What does he love most about Tuscany? “Partly that it’s so historic, and partly they look at this idea of patrimony, treating landscapes like a historical object, so it’s beautiful to drive through. You get this great sense of sweeping shapes, almost as though everything, such as umbrella pines and cypresses, has been carefully placed.” Back on home turf, his extensive travels for his BAFTA-winning Grand Designs series see him criss-crossing the country to shadow people’s building journeys and dreams. Grand Designs Abroad took McCloud to ambitious builds overseas, while Grand Tour of Europe saw him following in the footsteps of the 17th-century’s ‘Grand Tourists', delving behind the façades of some of the continent’s greatest buildings and ruins, including sites in Greece and Turkey. For Homes in the Wild, McCloud stayed in some of the remotest 40

places on the planet, such as the shadow of an active volcano in the foothills of the Chilean Andes. Living with intrepid Brits who have quit their rat-race existence, he inhabited some of the wildest places on earth. “We followed people building in ridiculous places. I’m not very good with snakes, and so I had some psychotherapy before we went to the middle of the Belize jungle where one of the largest, most aggressive snakes in the world lives,” says McCloud. A stay in a slum in Mumbai for Slumming It, meanwhile, saw another ironic twist for

Matera is one of the most beautiful places I've ever been to and has some of the most amazing contemporary architecture I've ever seen” McCloud’s crew. “I’ve no sense of smell, so I’m blessed with this fantastic ability to tolerate the places that other people find highly offensive,” he says. Foraging for fatbergs while filming with the Thames Water team, meanwhile, had handily taught McCloud some top ‘decontamination’ tips. “I took bottled water, whisky, handwipes and gel. Whisky completely cleans your digestive tract, sorting out any bugs. The wet wipes and the hand gel – which are also alcohol – deal with the outside, but you’ve also got to deal with the inside. That was my approach in the slum, and it worked!”

The presenter’s preferred destinations? “It’s memorable people, for me, that make places stand out. Northern Ireland is one of the most glorious destinations in the world. The people are so welcoming plus it has almost everything conceivable in the landscape. I calculated that Northern Ireland punches about seven times above its weight compared with the rest of the UK, in terms of producing great architecture and awardwinning buildings,” claims McCloud. As for abroad, Vicenza, in northern Italy, is irrefutably top of his list. “I love going back there. It’s a magical place and it’s one of the places where the people are all so lovely and the food is delicious.” In addition, Europe's Capital of Culture for 2019, Italy's spectacular city of caves, Matera, has chiselled out some cherished memories. “Matera is one of the most beautiful places I’ve ever been to and has some of the most amazing contemporary architecture I’ve ever seen. It’s full of the most amazing buildings built right back into the rock. It’s sort of primal and feels medieval but even more ancient.” What has travelling taught him? “That the world is a very small place, and a very precious place that we destroy at our peril,” he states. The architecture guru has ventured everywhere from Australia to the South Pacific for work and, when it’s time to hang up his hard hat for a broadcasting break, he loves to sojourn in Scotland or Ireland. However nowhere’s whet his design whistle quite like one particular place… and it’s inevitably Italy that rocks McCloud’s world. “Italy is still my destination of choice. I think my heart is a little bit linked to it…”