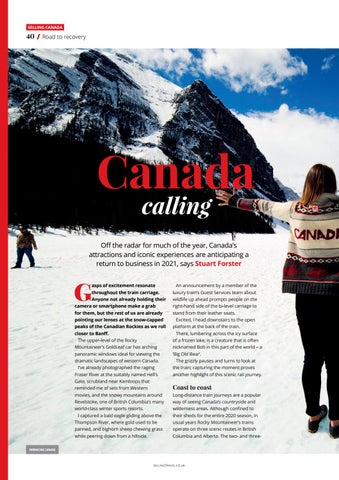 Off the radar for much of the year, Canada’s attractions and iconic experiences are anticipating a return to business in 2021, says Stuart Forster

asps of excitement resonate throughout the train carriage. anyone not already holding their camera or smartphone make a grab for them, but the rest of us are already pointing our lenses at the snow-capped peaks of the Canadian rockies as we roll closer to Banﬀ. The upper-level of the Rocky Mountaineer’s GoldLeaf car has arching panoramic windows ideal for viewing the dramatic landscapes of western Canada. I’ve already photographed the raging Fraser River at the suitably named Hell’s Gate, scrubland near Kamloops that reminded me of sets from Western movies, and the snowy mountains around Revelstoke, one of British Columbia’s many world-class winter sports resorts. I captured a bald eagle gliding above the Thompson River, where gold used to be panned, and bighorn sheep chewing grass while peering down from a hillside.

An announcement by a member of the luxury train’s Guest Services team about wildlife up ahead prompts people on the right-hand side of the bi-level carriage to stand from their leather seats. Excited, I head downstairs to the open platform at the back of the train. There, lumbering across the icy surface of a frozen lake, is a creature that is often nicknamed Bob in this part of the world – a ‘Big Old Bear’. The grizzly pauses and turns to look at the train; capturing the moment proves another highlight of this scenic rail journey.

Coast to coast Long-distance train journeys are a popular way of seeing Canada’s countryside and wilderness areas. Although confined to their sheds for the entire 2020 season, in usual years Rocky Mountaineer’s trains operate on three scenic routes in British Columbia and Alberta. The two- and three-