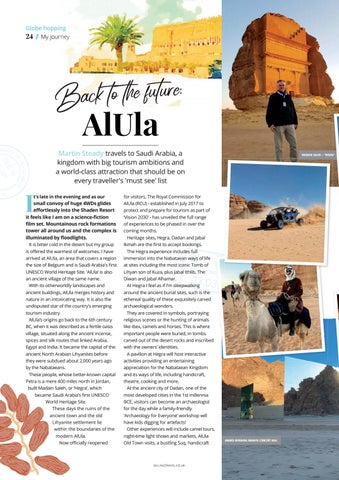 Martin Steady travels to Saudi Arabia, a kingdom with big tourism ambitions and a world-class attraction that should be on every traveller's 'must see' list

eﬀortlessly into the Shaden Resort it feels like I am on a science-ﬁction ﬁlm set. Mountainous rock formations tower all around us and the complex is illuminated by ﬂoodlights.

It is bitter cold in the desert but my group is oﬀered the warmest of welcomes. I have arrived at AlUla, an area that covers a region the size of Belgium and is Saudi Arabia's ﬁrst UNESCO World Heritage Site. ‘AlUla’ is also an ancient village of the same name. With its otherworldly landscapes and ancient buildings, AlUla merges history and nature in an intoxicating way. It is also the undisputed star of the country’s emerging tourism industry. AlUla’s origins go back to the 6th century BC, when it was described as a fertile oasis village, situated along the ancient incense, spices and silk routes that linked Arabia, Egypt and India. It became the capital of the ancient North Arabian Lihyanites before they were subdued about 2,000 years ago by the Nabataeans. These people, whose better-known capital Petra is a mere 400 miles north in Jordan, built Madain Saleh, or ‘Hegra’, which became Saudi Arabia’s ﬁrst UNESCO World Heritage Site. These days the ruins of the ancient town and the old Lihyanite settlement lie within the boundaries of the modern AlUla. Now oﬃcially reopened

for visitors, The Royal Commission for AlUla (RCU) - established in July 2017 to protect and prepare for tourism as part of ‘Vision 2030’ - has unveiled the full range of experiences to be phased in over the coming months. Heritage sites, Hegra, Dadan and Jabal Ikmah are the ﬁrst to accept bookings. The Hegra experience includes full immersion into the Nabataean ways of life at sites including the most iconic Tomb of Lihyan son of Kuza, plus Jabal Ithlib, The Diwan and Jabal Alhamar. At Hegra I feel as if I’m sleepwalking around the ancient burial sites, such is the ethereal quality of these exquisitely carved archaeological wonders. They are covered in symbols, portraying religious scenes or the hunting of animals like ibex, camels and horses. This is where important people were buried, in tombs carved out of the desert rocks and inscribed with the owners’ identities. A pavilion at Hegra will host interactive activities providing an entertaining appreciation for the Nabataean Kingdom and its ways of life, including handicraft, theatre, cooking and more. At the ancient city of Dadan, one of the most developed cities in the 1st millennia BCE, visitors can become an archaeologist for the day while a family-friendly ‘Archaeology for Everyone’ workshop will have kids digging for artefacts! Other experiences will include camel tours, night-time light shows and markets, AlUla Old Town visits, a bustling Suq, handicraft