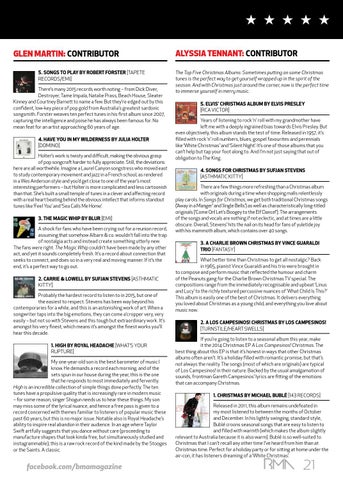 GLEN MARTIN: CONTRIBUTOR 5. SONGS TO PLAY BY ROBERT FORSTER [TAPETE RECORDS/EMI] There’s many 2015 records worth noting – from Dick Diver, Destroyer, Tame Impala, Natalie Prass, Beach House, Sleater Kinney and Courtney Barnett to name a few. But they’re edged out by this confident, low-key piece of pop gold from Australia’s greatest sardonic songsmith. Forster weaves ten perfect tunes in his first album since 2007, capturing the intelligence and poise he has always been famous for. No mean feat for an artist approaching 60 years of age. 4. HAVE YOU IN MY WILDERNESS BY JULIA HOLTER [DOMINO] Holter’s work is twisty and difficult, making the obvious grasp of pop songcraft harder to fully appreciate. Still, the deviations here are all worthwhile. Imagine a Laurel Canyon songstress who moved east to study contemporary movement and jazz in a French school, as rendered in a Wes Anderson style and you’d get close to one of the year’s most interesting performers – but Holter is more complicated and less cartoonish than that. She’s built a small temple of tunes in a clever and affecting record with a real heart beating behind the obvious intellect that informs standout tunes like ‘Feel You’ and ‘Sea Calls Me Home’. 3. THE MAGIC WHIP BY BLUR [EMI] A shock for fans who have been crying out for a reunion record, assuming that somehow Albarn & co. wouldn’t fall into the trap of nostalgia acts and instead create something utterly new. The fans were right. The Magic Whip couldn’t have been made by any other act, and yet it sounds completely fresh. It’s a record about connection that seeks to connect, and does so in a very real and moving manner. If it’s the end, it’s a perfect way to go out. 2. CARRIE & LOWELL BY SUFJAN STEVENS [ASTHMATIC KITTY] Probably the hardest record to listen to in 2015, but one of the easiest to respect. Stevens has been way beyond his contemporaries for a while, and this is an astonishing work of art. When a songwriter taps into the big emotions, they can come a‘cropper very, very easily – but not so with Stevens and this tough but extraordinary work. It’s amongst his very finest, which means it’s amongst the finest works you’ll hear this decade. 1. HIGH BY ROYAL HEADACHE [WHAT’S YOUR RUPTURE] My one-year-old son is the best barometer of music I know. He demands a record each morning, and of the sets spun in our house during the year, this is the one that he responds to most immediately and fervently. High is an incredible collection of simple things done perfectly. The ten tunes have a propulsive quality that is increasingly rare in modern music – for some reason, singer Shogun needs us to hear these things. My son may miss some of the lyrical nuance, and hence a free pass is given to a record concerned with themes familiar to listeners of popular music these past 60 years, but this is no major issue. Notable also is Royal Headache’s ability to inspire real abandon in their audience. In an age where Taylor Swift artfully suggests that you dance without care (proceeding to manufacture shapes that look kinda free, but simultaneously studied and instagrammable), this is a raw rock record of the kind made by the Stooges or the Saints. A classic.

ALYSSIA TENNANT: CONTRIBUTOR The Top Five Christmas Albums: Sometimes putting on some Christmas tunes is the perfect way to get yourself wrapped up in the spirit of the season. And with Christmas just around the corner, now is the perfect time to immerse yourself in merry music. 5. ELVIS’ CHRISTMAS ALBUM BY ELVIS PRESLEY [RCA VICTOR] Years of listening to rock ‘n’ roll with my grandmother have left me with a deeply ingrained bias towards Elvis Presley. But even objectively, this album stands the test of time. Released in 1957, it’s filled with rock ‘n’ roll numbers, blues, gospel favourites and perennials like ‘White Christmas’ and ‘Silent Night’. It’s one of those albums that you can’t help but tap your foot along to. And I’m not just saying that out of obligation to The King. 4. SONGS FOR CHRISTMAS BY SUFJAN STEVENS [ASTHMATIC KITTY] There are few things more refreshing than a Christmas album with originals during a time when shopping malls relentlessly play carols. In Songs for Christmas, we get both traditional Christmas songs (‘Away in a Manger’ and ‘Jingle Bells’) as well as characteristically long-titled originals (‘Come On! Let’s Boogey to the Elf Dance!’). The arrangements of the songs and vocals are nothing if not eclectic, and at times are a little obscure. Overall, Stevens’ hits the nail on its head for fans of yuletide joy with his mammoth album, which contains over 40 songs. 3. A CHARLIE BROWN CHRISTMAS BY VINCE GUARALDI TRIO [FANTASY] What better time than Christmas to get all nostalgic? Back in 1965, pianist Vince Guaraldi and his trio were brought in to compose and perform music that reflected the humour and charm of the Peanuts gang for the Charlie Brown Christmas TV special. The compositions range from the immediately recognisable and upbeat ‘Linus and Lucy’ to the richly textured percussive nuances of ‘What Child Is This?’ This album is easily one of the best of Christmas. It delivers everything you loved about Christmas as a young child, and everything you love about music now. 2. A LOS CAMPESINOS! CHRISTMAS BY LOS CAMPESINOS! [TURNSTILE/HEART SWELLS] If you’re going to listen to a seasonal album this year, make it the 2014 Christmas EP A Los Campesinos! Christmas. The best thing about this EP is that it’s honest in ways that other Christmas albums often aren’t. It’s a holiday filled with romantic promise, but that’s not always the reality. The songs (most of which are originals) are typical of Los Campesinos! in their nature. Backed by the usual amalgamation of sounds, frontman Gareth Campesinos’ lyrics are fitting of the emotions that can accompany Christmas. 1. CHRISTMAS BY MICHAEL BUBLÉ [143 RECORDS] Released in 2011, this album remains undefeated in my most listened to between the months of October and December. In his lightly swinging, standard style, Bublé croons seasonal songs that are easy to listen to and filled with warmth (which makes the album slightly relevant to Australia because it is also warm). Bublé is so well-suited to Christmas that I can’t recall any other time I’ve heard from him than at Christmas time. Perfect for a holiday party or for sitting at home under the air-con, it has listeners dreaming of a ‘White Christmas’. 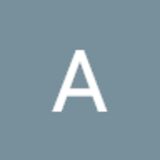