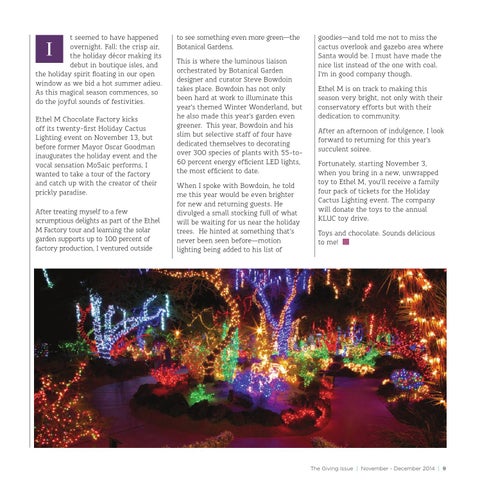 t seemed to have happened overnight. Fall: the crisp air, the holiday décor making its debut in boutique isles, and the holiday spirit floating in our open window as we bid a hot summer adieu. As this magical season commences, so do the joyful sounds of festivities.

Ethel M Chocolate Factory kicks off its twenty-first Holiday Cactus Lighting event on November 13, but before former Mayor Oscar Goodman inaugurates the holiday event and the vocal sensation Mo5aic performs, I wanted to take a tour of the factory and catch up with the creator of their prickly paradise. After treating myself to a few scrumptious delights as part of the Ethel M Factory tour and learning the solar garden supports up to 100 percent of factory production, I ventured outside

to see something even more green—the Botanical Gardens. This is where the luminous liaison orchestrated by Botanical Garden designer and curator Steve Bowdoin takes place. Bowdoin has not only been hard at work to illuminate this year’s themed Winter Wonderland, but he also made this year’s garden even greener. This year, Bowdoin and his slim but selective staff of four have dedicated themselves to decorating over 300 species of plants with 55-to60 percent energy efficient LED lights, the most efficient to date. When I spoke with Bowdoin, he told me this year would be even brighter for new and returning guests. He divulged a small stocking full of what will be waiting for us near the holiday trees. He hinted at something that’s never been seen before—motion lighting being added to his list of

goodies—and told me not to miss the cactus overlook and gazebo area where Santa would be. I must have made the nice list instead of the one with coal. I’m in good company though. Ethel M is on track to making this season very bright, not only with their conservatory efforts but with their dedication to community. After an afternoon of indulgence, I look forward to returning for this year’s succulent soiree. Fortunately, starting November 3, when you bring in a new, unwrapped toy to Ethel M, you’ll receive a family four pack of tickets for the Holiday Cactus Lighting event. The company will donate the toys to the annual KLUC toy drive. Toys and chocolate. Sounds delicious to me! 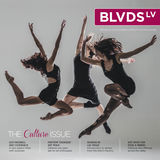