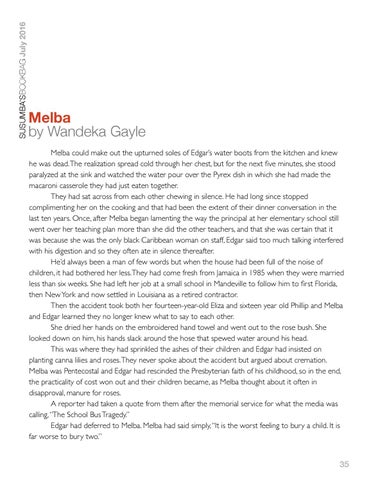 Melba by Wandeka Gayle Melba could make out the upturned soles of Edgar’s water boots from the kitchen and knew he was dead. The realization spread cold through her chest, but for the next five minutes, she stood paralyzed at the sink and watched the water pour over the Pyrex dish in which she had made the macaroni casserole they had just eaten together. They had sat across from each other chewing in silence. He had long since stopped complimenting her on the cooking and that had been the extent of their dinner conversation in the last ten years. Once, after Melba began lamenting the way the principal at her elementary school still went over her teaching plan more than she did the other teachers, and that she was certain that it was because she was the only black Caribbean woman on staff, Edgar said too much talking interfered with his digestion and so they often ate in silence thereafter. He’d always been a man of few words but when the house had been full of the noise of children, it had bothered her less. They had come fresh from Jamaica in 1985 when they were married less than six weeks. She had left her job at a small school in Mandeville to follow him to first Florida, then New York and now settled in Louisiana as a retired contractor. Then the accident took both her fourteen-year-old Eliza and sixteen year old Phillip and Melba and Edgar learned they no longer knew what to say to each other. She dried her hands on the embroidered hand towel and went out to the rose bush. She looked down on him, his hands slack around the hose that spewed water around his head. This was where they had sprinkled the ashes of their children and Edgar had insisted on planting canna lilies and roses. They never spoke about the accident but argued about cremation. Melba was Pentecostal and Edgar had rescinded the Presbyterian faith of his childhood, so in the end, the practicality of cost won out and their children became, as Melba thought about it often in disapproval, manure for roses. A reporter had taken a quote from them after the memorial service for what the media was calling, “The School Bus Tragedy.” Edgar had deferred to Melba. Melba had said simply, “It is the worst feeling to bury a child. It is far worse to bury two.”