New Homage to Soumitra Chatterjee, the Man Not the Actor 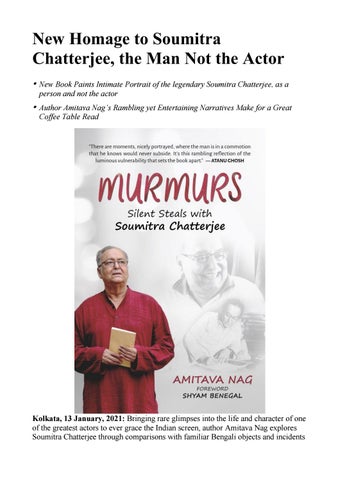 New Homage to Soumitra Chatterjee, the Man Not the Actor • •

New Book Paints Intimate Portrait of the legendary Soumitra Chatterjee, as a person and not the actor Author Amitava Nag’s Rambling yet Entertaining Narratives Make for a Great Coffee Table Read

Kolkata, 13 January, 2021: Bringing rare glimpses into the life and character of one of the greatest actors to ever grace the Indian screen, author Amitava Nag explores Soumitra Chatterjee through comparisons with familiar Bengali objects and incidents

in his new book - ‘Murmurs: Silent Steals with Soumitra Chatterjee’. The book will be launched officially in the first week of February. Published by Blue Pencil, the work is also available for pre-orders on Amazon and will be available to readers on 19 January to mark the birth anniversary of the cinema doyen. Soumitra Chatterjee was one of the most recognisable faces of Bengali and Indian cinema, having worked on 14 of the legendary Satyajit Ray’s most iconic films, including Apur Sansar (1959), Devi (1960), Teen Kanya (1961), Charulata (1964), Arenyar Din Ratri (1970), and Sonar Kella (1974). Chatterjee’s incredible versatility and sensitivity to the characters he portrayed have been aptly documented by wellknown British theatre and film critic, Marie Seton, who described ‘the natural sensitivity of his appearance’ as his most endearing quality. Ray himself called Chatterjee an ‘intelligent actor’ for whom, he said, “I do know that to the last day of my artist’s life, my dependence on him will remain intact”. While most biographies on Soumitra Chatterjee focus on the interactions that other actors and insiders had with the former, Nag’s book is rambling and intimate, borne out of his own experiences and impressions with the venerable thespian. As Nag puts it, “ In our discussions there have been some common themes – separation, return, fear, death. Then, painting, poetry, and reading. Not much do we discuss cinema. No, not anymore! The themes repeat though not in this same order, but I guess it is natural. He always says he is at the brink of life. I, probably, wish to know beforehand what lies beyond the precipice”. With a foreword by award-winning director, Shyam Benegal, Amitava Nag’s unique perspectives, bring to life a revered idol by making him human - a friend and confidant - who instantly invokes the same sympathies and affection that we harbour for those we know and admire. This work will go a long way in bringing the legend of Soumitra closer to his fans and curious readers alike, and bring a rare appreciation for things old and out-of-fashion in a postmodern world. For more information, contact: Antara Nanda Mondal Blue Pencil Email: sales@bluepencilpublishers.com Phone: +91.95828.49600

New Homage to Soumitra Chatterjee, the Man Not the Actor

• New Book Paints Intimate Portrait of the legendary Soumitra Chatterjee, as a person and not the actor • Author Amitava Nag’s Rambling yet Entertaining Narratives Make for a Great Coffee Table Read 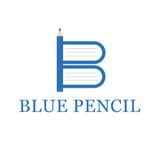