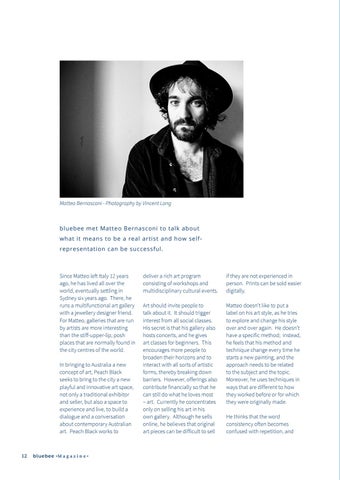 bluebee met Matteo Bernasconi to talk about what it means to be a real artist and how selfrepresentation can be successful.

Since Matteo left Italy 12 years ago, he has lived all over the world, eventually settling in Sydney six years ago. There, he runs a multifunctional art gallery with a jewellery designer friend. For Matteo, galleries that are run by artists are more interesting than the stiff-upper-lip, posh places that are normally found in the city centres of the world. In bringing to Australia a new concept of art, Peach Black seeks to bring to the city a new playful and innovative art space, not only a traditional exhibitor and seller, but also a space to experience and live, to build a dialogue and a conversation about contemporary Australian art. Peach Black works to

if they are not experienced in person. Prints can be sold easier digitally.

Art should invite people to talk about it. It should trigger interest from all social classes. His secret is that his gallery also hosts concerts, and he gives art classes for beginners. This encourages more people to broaden their horizons and to interact with all sorts of artistic forms, thereby breaking down barriers. However, offerings also contribute financially so that he can still do what he loves most – art. Currently he concentrates only on selling his art in his own gallery. Although he sells online, he believes that original art pieces can be difficult to sell

Matteo doesn’t like to put a label on his art style, as he tries to explore and change his style over and over again. He doesn’t have a specific method; instead, he feels that his method and technique change every time he starts a new painting, and the approach needs to be related to the subject and the topic. Moreover, he uses techniques in ways that are different to how they worked before or for which they were originally made. He thinks that the word consistency often becomes confused with repetition, and 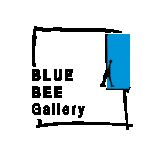