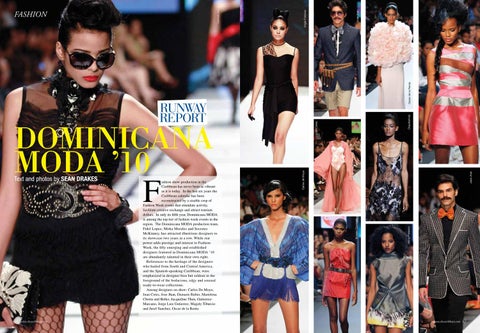 ashion show production in the Caribbean has never been as vibrant as it is today. In the last six years the Caribbean calendar has been reconstructed by a sizable crop of Fashion Week events that stimulate activity, facilitate creative exchange and attract tourism dollars. In only its fifth year, Dominicana MODA is among the top tier of fashion week events in the region. The Dominicana MODA production team, Fidel Lopez, Mirka Morales and Socrates McKinney, has attracted illustrious designers to its showcase two years in a row. While star power adds prestige and interest to Fashion Week, the fifty emerging and established designers featured in Dominicana MODA â&amp;#x20AC;&amp;#x2122;10 are abundantly talented in their own right. References to the heritage of the designers who hailed from South and Central America, and the Spanish-speaking Caribbean, were emphasized in designer bios but seldom in the foreground of the bodacious, edgy and sensual ready-to-wear collections. Among designers on show: Carlos De Moyo, Juan Cotes, Jose Jhan, Damaris Rubio, Marielena Chotin and Belko, Jacqueline Then, GutierrezMarcano, Jorge Luis Gutierrez, Magaly Tiburcio and Jusef Sanchez, Oscar de la Renta

Text and photos by Sean Drakes 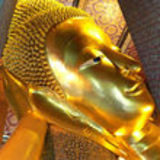