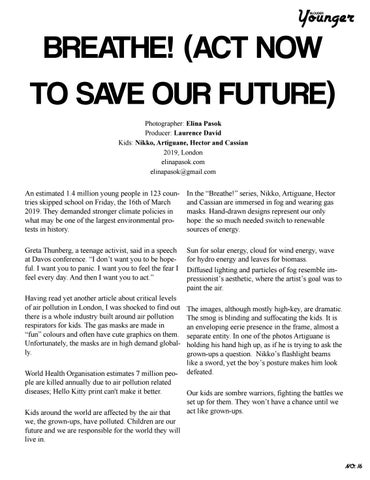 An estimated 1.4 million young people in 123 countries skipped school on Friday, the 16th of March 2019. They demanded stronger climate policies in what may be one of the largest environmental protests in history.

In the “Breathe!” series, Nikko, Artiguane, Hector and Cassian are immersed in fog and wearing gas masks. Hand-drawn designs represent our only hope: the so much needed switch to renewable sources of energy.

Sun for solar energy, cloud for wind energy, wave for hydro energy and leaves for biomass. Diffused lighting and particles of fog resemble impressionist’s aesthetic, where the artist’s goal was to paint the air.

Having read yet another article about critical levels of air pollution in London, I was shocked to find out there is a whole industry built around air pollution respirators for kids. The gas masks are made in “fun” colours and often have cute graphics on them. Unfortunately, the masks are in high demand globally. World Health Organisation estimates 7 million people are killed annually due to air pollution related diseases; Hello Kitty print can't make it better. Kids around the world are affected by the air that we, the grown-ups, have polluted. Children are our future and we are responsible for the world they will live in.

The images, although mostly high-key, are dramatic. The smog is blinding and suffocating the kids. It is an enveloping eerie presence in the frame, almost a separate entity. In one of the photos Artiguane is holding his hand high up, as if he is trying to ask the grown-ups a question. Nikko’s flashlight beams like a sword, yet the boy’s posture makes him look defeated. Our kids are sombre warriors, fighting the battles we set up for them. They won’t have a chance until we act like grown-ups. 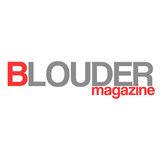