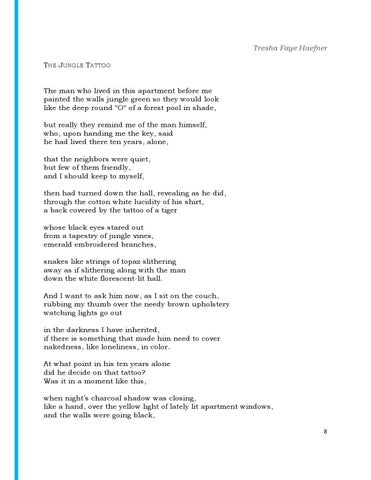 Tresha Faye Haefner THE JUNGLE TATTOO The man who lived in this apartment before me painted the walls jungle green so they would look like the deep round "O" of a forest pool in shade, but really they remind me of the man himself, who, upon handing me the key, said he had lived there ten years, alone, that the neighbors were quiet, but few of them friendly, and I should keep to myself, then had turned down the hall, revealing as he did, through the cotton white lucidity of his shirt, a back covered by the tattoo of a tiger whose black eyes stared out from a tapestry of jungle vines, emerald embroidered branches, snakes like strings of topaz slithering away as if slithering along with the man down the white florescent-lit hall. And I want to ask him now, as I sit on the couch, rubbing my thumb over the needy brown upholstery watching lights go out in the darkness I have inherited, if there is something that made him need to cover nakedness, like loneliness, in color. At what point in his ten years alone did he decide on that tattoo? Was it in a moment like this, when nightâ&#x20AC;&#x2DC;s charcoal shadow was closing, like a hand, over the yellow light of lately lit apartment windows, and the walls were going black, 8 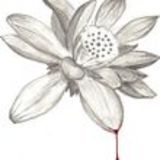