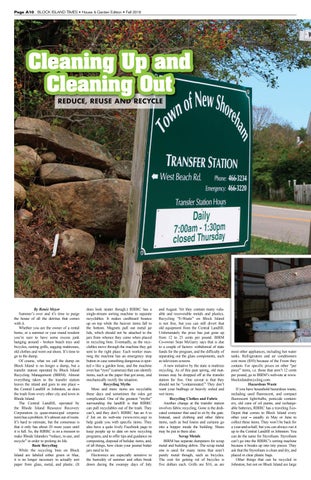 Cleaning Up and Cleaning Out REDUCE, REUSE AND RECYCLE

By Renée Meyer Summer’s over and it’s time to purge the house of all the detritus that comes with it. Whether you are the owner of a rental home, or a summer or year round resident you’re sure to have some excess junk hanging around - broken beach toys and bicycles, rusting grills, sagging mattresses, old clothes and worn out shoes. It’s time to go to the dump. Of course, what we call the dump on Block Island is no longer a dump, but a transfer station operated by Block Island Recycling Management (BIRM). Almost everything taken to the transfer station leaves the island and goes to one place – the Central Landfill in Johnston, as does the trash from every other city and town in Rhode Island. The Central Landfill, operated by the Rhode Island Resource Recovery Corporation (a quasi-municipal corporation) has a problem. It’s almost out of room. It’s hard to estimate, but the consensus is that it only has about 20 more years until it is full. So, the RIRRC is on a mission to make Rhode Islanders “reduce, re-use, and recycle” in order to prolong its life. Basic Recycling While the recycling bins on Block Island are labeled either green or blue, it is no longer necessary to actually sort paper from glass, metal, and plastic. (It

does look neater though.) RIRRC has a single-stream sorting machine to separate recyclables. It makes cardboard bounce up on top while the heavier items fall to the bottom. Magnets pull out metal jar lids, which should not be attached to the jars from whence they came when placed in recycling bins. Eventually, as the recyclables move through the machine they get sent to the right place. Each worker manning the machine has an emergency stop button in case something dangerous is spotted – like a garden hose, and the machine even has “eyes” (cameras) that can identify items, such as the paper that got away, and mechanically rectify the situation. Recycling Myths More and more items are recyclable these days and sometimes the rules get complicated. One of the greatest “myths” surrounding the landfill is that RIRRC can pull recyclables out of the trash. They can’t, and they don’t. RIRRC has an A to Z list on its web-site (www.rirrc.org) to help guide you with specific items. They also have a quite lively Facebook page to keep people up to date on new recycling programs, and to offer tips and guidance on composting, disposal of holiday items, and, of all things, how clean your peanut butter jars need to be. Electronics are especially sensitive to the humidity of summer and often break down during the swampy days of July

and August. Yet they contain many valuable and recoverable metals and plastics. Recycling “E-Waste” on Block Island is not free, but you can still divert that old equipment from the Central Landfill. Unfortunately the price has just gone up from 12 to 25 cents per pound. BIRM Co-owner Sean McGarry says that is due to a couple of factors: withdrawal of state funds for the program, and the difficulty of separating out the glass components, such as television screens. A new initiative by the state is mattress recycling. As of this past spring, old mattresses may be dropped off at the transfer station for free. One caveat is that they should not be “contaminated.” They don’t want your bedbugs or heavily soiled and wet items. Recycling Clothes and Fabric Another change at the transfer station involves fabric recycling. Gone is the dedicated container that used to sit by the gate. Instead, used clothing and other fabric items, such as bed linens and curtains go into a hopper inside the building. Shoes may be put in there also. Scrap Metals BIRM has separate dumpsters for scrap metal and building debris. The scrap metal one is used for many items that aren’t purely metal though, such as bicycles. The cost for getting rid of bicycles is five dollars each. Grills are $10, as are

most other appliances, including hot water tanks. Refrigerators and air conditioners cost more ($50) because of the Freon they contain. For specific prices on other “per piece” items, i.e. those that aren’t 12 cents per pound, go to BIRM’s web-site at www. blockislandrecycling.com. Hazardous Waste If you have household hazardous waste, including used fluorescent, and compact fluorescent light-bulbs, pesticide containers, old cans of oil paints, and rechargeable batteries, RIRRC has a traveling EcoDepot that comes to Block Island every other year – usually in May or June to collect these items. They won’t be back for a year-and-a-half, but you can always run it up to the Central Landfill in Johnston. You can do the same for Styrofoam. Styrofoam can’t go into the RIRRC’s sorting machine because it breaks up into tiny pieces. They ask that the Styrofoam is clean and dry, and placed in clear plastic bags. Other things that can be recycled in Johnston, but not on Block Island are large