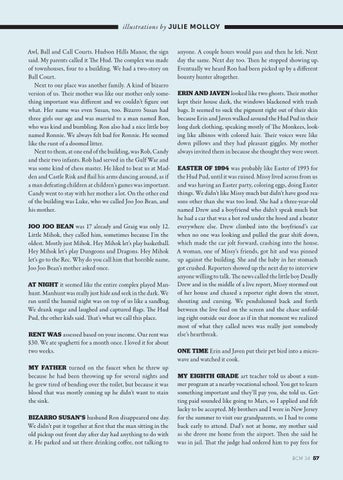 illustrations by JULIE MOLLOY Awl, Ball and Call Courts. Hudson Hills Manor, the sign said. My parents called it The Hud. The complex was made of townhouses, four to a building. We had a two-story on Ball Court. Next to our place was another family. A kind of bizarro version of us. Their mother was like our mother only something important was different and we couldn’t figure out what. Her name was even Susan, too. Bizarro Susan had three girls our age and was married to a man named Ron, who was kind and bumbling. Ron also had a nice little boy named Ronnie. We always felt bad for Ronnie. He seemed like the runt of a doomed litter. Next to them, at one end of the building, was Rob, Candy and their two infants. Rob had served in the Gulf War and was some kind of chess master. He liked to beat us at Madden and Castle Risk and flail his arms dancing around, as if a man defeating children at children’s games was important. Candy went to stay with her mother a lot. On the other end of the building was Luke, who we called Joo Joo Bean, and his mother. JOO JOO BEAN was 17 already and Graig was only 12. Little Mihok, they called him, sometimes because I’m the oldest. Mostly just Mihok. Hey Mihok let’s play basketball. Hey Mihok let’s play Dungeons and Dragons. Hey Mihok let’s go to the Rec. Why do you call him that horrible name, Joo Joo Bean’s mother asked once. AT NIGHT it seemed like the entire complex played Manhunt. Manhunt was really just hide and seek in the dark. We ran until the humid night was on top of us like a sandbag. We drank sugar and laughed and captured flags. The Hud Pud, the other kids said. That’s what we call this place. RENT WAS assessed based on your income. Our rent was $30. We ate spaghetti for a month once. I loved it for about two weeks. MY FATHER turned on the faucet when he threw up because he had been throwing up for several nights and he grew tired of bending over the toilet, but because it was blood that was mostly coming up he didn’t want to stain the sink. BIZARRO SUSAN’S husband Ron disappeared one day. We didn’t put it together at first that the man sitting in the old pickup out front day after day had anything to do with it. He parked and sat there drinking coffee, not talking to

anyone. A couple hours would pass and then he left. Next day the same. Next day too. Then he stopped showing up. Eventually we heard Ron had been picked up by a different bounty hunter altogether. ERIN AND JAVEN looked like two ghosts. Their mother kept their house dark, the windows blackened with trash bags. It seemed to suck the pigment right out of their skin because Erin and Javen walked around the Hud Pud in their long dark clothing, speaking mostly of The Monkees, looking like albinos with colored hair. Their voices were like down pillows and they had pleasant giggles. My mother always invited them in because she thought they were sweet. EASTER OF 1994 was probably like Easter of 1993 for the Hud Pud, until it was ruined. Missy lived across from us and was having an Easter party, coloring eggs, doing Easter things. We didn’t like Missy much but didn’t have good reasons other than she was too loud. She had a three-year-old named Drew and a boyfriend who didn’t speak much but he had a car that was a hot rod under the hood and a beater everywhere else. Drew climbed into the boyfriend’s car when no one was looking and pulled the gear shift down, which made the car jolt forward, crashing into the house. A woman, one of Missy’s friends, got hit and was pinned up against the building. She and the baby in her stomach got crushed. Reporters showed up the next day to interview anyone willing to talk. The news called the little boy Deadly Drew and in the middle of a live report, Missy stormed out of her house and chased a reporter right down the street, shouting and cursing. We pendulumed back and forth between the live feed on the screen and the chase unfolding right outside our door as if in that moment we realized most of what they called news was really just somebody else’s heartbreak. ONE TIME Erin and Javen put their pet bird into a microwave and watched it cook. MY EIGHTH GRADE art teacher told us about a summer program at a nearby vocational school. You get to learn something important and they’ll pay you, she told us. Getting paid sounded like going to Mars, so I applied and felt lucky to be accepted. My brothers and I were in New Jersey for the summer to visit our grandparents, so I had to come back early to attend. Dad’s not at home, my mother said as she drove me home from the airport. Then she said he was in jail. That the judge had ordered him to pay fees for BCM 34 57 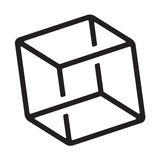