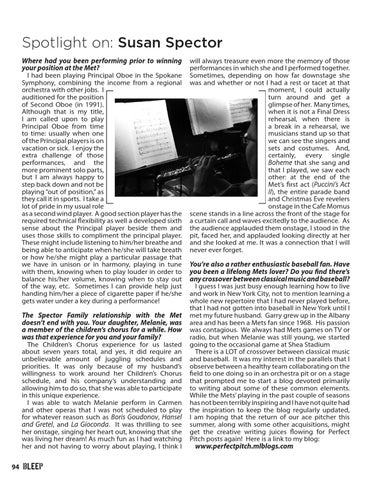 Spotlight on: Susan Spector Where had you been performing prior to winning your position at the Met? I had been playing Principal Oboe in the Spokane Symphony, combining the income from a regional orchestra with other jobs. I auditioned for the position of Second Oboe (in 1991). Although that is my title, I am called upon to play Principal Oboe from time to time: usually when one of the Principal players is on vacation or sick. I enjoy the extra challenge of those performances, and the more prominent solo parts, but I am always happy to step back down and not be playing “out of position,” as they call it in sports. I take a lot of pride in my usual role as a second wind player. A good section player has the required technical flexibility as well a developed sixth sense about the Principal player beside them and uses those skills to compliment the principal player. These might include listening to him/her breathe and being able to anticipate when he/she will take breath or how he/she might play a particular passage that we have in unison or in harmony, playing in tune with them, knowing when to play louder in order to balance his/her volume, knowing when to stay out of the way, etc. Sometimes I can provide help just handing him/her a piece of cigarette paper if he/she gets water under a key during a performance! The Spector Family relationship with the Met doesn’t end with you. Your daughter, Melanie, was a member of the children’s chorus for a while. How was that experience for you and your family? The Children’s Chorus experience for us lasted about seven years total, and yes, it did require an unbelievable amount of juggling schedules and priorities. It was only because of my husband’s willingness to work around her Children’s Chorus schedule, and his company’s understanding and allowing him to do so, that she was able to participate in this unique experience. I was able to watch Melanie perform in Carmen and other operas that I was not scheduled to play for whatever reason such as Boris Goudonov, Hansel and Gretel, and La Gioconda. It was thrilling to see her onstage, singing her heart out, knowing that she was living her dream! As much fun as I had watching her and not having to worry about playing, I think I 94 BLEEP

will always treasure even more the memory of those performances in which she and I performed together. Sometimes, depending on how far downstage she was and whether or not I had a rest or tacet at that moment, I could actually turn around and get a glimpse of her. Many times, when it is not a Final Dress rehearsal, when there is a break in a rehearsal, we musicians stand up so that we can see the singers and sets and costumes. And, certainly, every single Boheme that she sang and that I played, we saw each other: at the end of the Met’s first act (Puccini’s Act II), the entire parade band and Christmas Eve revelers onstage in the Cafe Momus scene stands in a line across the front of the stage for a curtain call and waves excitedly to the audience. As the audience applauded them onstage, I stood in the pit, faced her, and applauded looking directly at her and she looked at me. It was a connection that I will never ever forget. You’re also a rather enthusiastic baseball fan. Have you been a lifelong Mets lover? Do you find there’s any crossover between classical music and baseball? I guess I was just busy enough learning how to live and work in New York City, not to mention learning a whole new repertoire that I had never played before, that I had not gotten into baseball in New York until I met my future husband. Garry grew up in the Albany area and has been a Mets fan since 1968. His passion was contagious. We always had Mets games on TV or radio, but when Melanie was still young, we started going to the occasional game at Shea Stadium There is a LOT of crossover between classical music and baseball. It was my interest in the parallels that I observe between a healthy team collaborating on the field to one doing so in an orchestra pit or on a stage that prompted me to start a blog devoted primarily to writing about some of these common elements. While the Mets’ playing in the past couple of seasons has not been terribly inspiring and I have not quite had the inspiration to keep the blog regularly updated, I am hoping that the return of our ace pitcher this summer, along with some other acquisitions, might get the creative writing juices flowing for Perfect Pitch posts again! Here is a link to my blog: www.perfectpitch.mlblogs.com 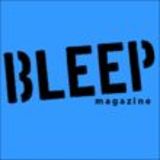 We've partnered with New York cabaret mainstay Jim Caruso to bring you some of the most incredible artists working today. Klea Blackhurst, N...

We've partnered with New York cabaret mainstay Jim Caruso to bring you some of the most incredible artists working today. Klea Blackhurst, N...