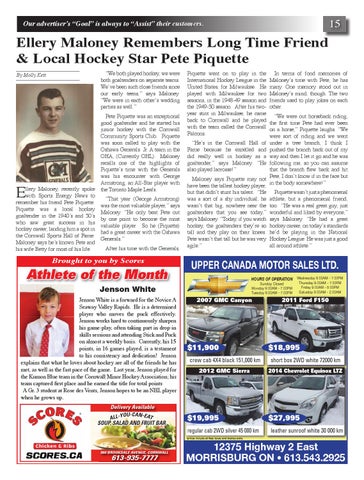 Our advertiser’s “Goal” is always to “Assist” their customers.

Ellery Maloney Remembers Long Time Friend & Local Hockey Star Pete Piquette “We both played hockey, we were both goaltenders on separate teams. We’ve been such close friends since our early teens,” says Maloney. “We were in each other’s wedding parties as well.”

llery Maloney, recently spoke with Sports Energy News to remember his friend Pete Piquette. Piquette was a local hockey goaltender in the 1940’s and 50’s who saw great success in his hockey career, landing him a spot in the Cornwall Sports Hall of Fame. Maloney says he’s known Pete and his wife Betty for most of his life.

Pete Piquette was an exceptional good goaltender and he started his junior hockey with the Cornwall Community Sports Club. Piquette was soon called to play with the Oshawa Generals Jr. A team in the OHA, (Currently OHL). Maloney recalls one of the highlights of Piquette’s time with the Generals was his encounter with George Armstrong, an All-Star player with the Toronto Maple Leafs. “That year (George Armstrong) was the most valuable player,” says Maloney. “He only beat Pete out by one point to become the most valuable player. So he (Piquette) had a great career with the Oshawa Generals.” After his time with the Generals,

Brought to you by Scores

Athlete of the Month

Piquette went on to play in the International Hockey League in the United States, for Milwaukee. He played with Milwaukee for two seasons, in the 1948-49 season and the 1949-50 season. After his twoyear stint in Milwaukee, he came back to Cornwall and he played with the team called the Cornwall Falcons. “He’s in the Cornwall Hall of Fame because he excelled and did really well in hockey as a goaltender,” says Maloney. “He also played lacrosse!”

Maloney says Piquette may not have been the tallest hockey player, but that didn’t stunt his talent. “He was a sort of a shy individual; he wasn’t that big, nowhere near the goaltenders that you see today,” says Maloney. “Today, if you watch hockey, the goaltenders they’re so tall and they play on their knees. Pete wasn’t that tall but he was very agile.”

In terms of fond memories of Maloney’s time with Pete, he has many. One memory stood out in Maloney’s mind, though. The two friends used to play jokes on each other.

“We were out horseback riding, the ﬁrst time Pete had ever been on a horse,” Piquette laughs. “We were sort of riding and we went under a tree branch, I think I pushed the branch back out of my way and then I let it go and he was following me, so you can assume that the branch ﬂew back and hit Pete, I don’t know if in the face but in the body somewhere!” Piquette wasn’t just a phenomenal athlete, but a phenomenal friend, too. “He was a real great guy, just wonderful and liked by everyone,” says Maloney. “He had a great hockey career, on today’s standards he’d be playing in the National Hockey League. He was just a good all around athlete.”

Jenson White Jenson White is a forward for the Novice A Seaway Valley Rapids. He is a determined player who moves the puck effectively. Jenson works hard to continuously sharpen his game-play, often taking part in drop-in skills sessions and attending Stick and Puck on almost a weekly basis. Currently, his 15 points, in 16 games played, is a testament to his consistency and dedication! Jenson explains that what he loves about hockey are all of the friends he has met, as well as the fast pace of the game. Last year, Jenson played for the Kumon Blue team in the Cornwall Minor Hockey Association; his team captured ﬁrst place and he earned the title for total points A Gr. 3 student at Rose des Vents, Jenson hopes to be an NHL player when he grows up.

*prices include all fees taxes and license extra. 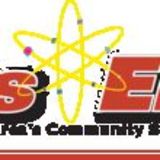