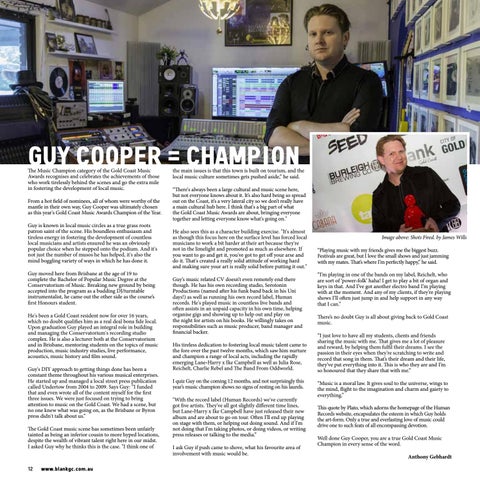 GUY COOPER = CHAMPION The Music Champion category of the Gold Coast Music Awards recognises and celebrates the achievements of those who work tirelessly behind the scenes and go the extra mile in fostering the development of local music.

From a hot field of nominees, all of whom were worthy of the mantle in their own way, Guy Cooper was ultimately chosen as this year's Gold Coast Music Awards Champion of the Year. Guy is known in local music circles as a true grass roots patron saint of the scene. His boundless enthusiasm and tireless energy in fostering the development of countless local musicians and artists ensured he was an obviously popular choice when he stepped onto the podium. And it's not just the number of musos he has helped, it's also the mind boggling variety of ways in which he has done it. Guy moved here from Brisbane at the age of 19 to complete the Bachelor of Popular Music Degree at the Conservatorium of Music. Breaking new ground by being accepted into the program as a budding DJ/turntable instrumentalist, he came out the other side as the course’s first Honours student. He's been a Gold Coast resident now for over 16 years, which no doubt qualifies him as a real deal bona fide local. Upon graduation Guy played an integral role in building and managing the Conservatorium's recording studio complex. He is also a lecturer both at the Conservatorium and in Brisbane, mentoring students on the topics of music production, music industry studies, live performance, acoustics, music history and film sound. Guy's DIY approach to getting things done has been a constant theme throughout his various musical enterprises. He started up and managed a local street press publication called Undertow from 2004 to 2009. Says Guy: “I funded that and even wrote all of the content myself for the first three issues. We were just focused on trying to bring attention to music on the Gold Coast. We had a scene, but no one knew what was going on, as the Brisbane or Byron press didn't talk about us.” The Gold Coast music scene has sometimes been unfairly tainted as being an inferior cousin to more hyped locations, despite the wealth of vibrant talent right here in our midst. I asked Guy why he thinks this is the case. "I think one of

the main issues is that this town is built on tourism, and the local music culture sometimes gets pushed aside,” he said. “There's always been a large cultural and music scene here, but not everyone knows about it. It’s also hard being so spread out on the Coast, it’s a very lateral city so we don’t really have a main cultural hub here. I think that's a big part of what the Gold Coast Music Awards are about, bringing everyone together and letting everyone know what's going on." He also sees this as a character building exercise. "It's almost as though this focus here on the surface level has forced local musicians to work a bit harder at their art because they're not in the limelight and promoted as much as elsewhere. If you want to go and get it, you've got to get off your arse and do it. That's created a really solid attitude of working hard and making sure your art is really solid before putting it out." Guy’s music related CV doesn’t even remotely end there though. He has his own recording studio, Serotonin Productions (named after his funk band back in his Uni days!) as well as running his own record label, Human records. He's played music in countless live bands and often assists in an unpaid capacity in his own time, helping organise gigs and showing up to help out and play on the night for artists on his books. He willingly takes on responsibilities such as music producer, band manager and financial backer. His tireless dedication to fostering local music talent came to the fore over the past twelve months, which saw him nurture and champion a range of local acts, including the rapidly emerging Lane-Harry x Ike Campbell as well as Julia Rose, Reichelt, Charlie Rebel and The Band From Oddworld. I quiz Guy on the coming 12 months, and not surprisingly this year’s music champion shows no signs of resting on his laurels. "With the record label (Human Records) we've currently got five artists. They've all got slightly different time lines, but Lane-Harry x Ike Campbell have just released their new album and are about to go on tour. Often I'll end up playing on stage with them, or helping out doing sound. And if I'm not doing that I'm taking photos, or doing videos, or writing press releases or talking to the media.” I ask Guy if push came to shove, what his favourite area of involvement with music would be.

Image above: Shots Fired. by James Wills “Playing music with my friends gives me the biggest buzz. Festivals are great, but I love the small shows and just jamming with my mates. That’s where I’m perfectly happy,” he said. “I’m playing in one of the bands on my label, Reichelt, who are sort of ‘power-folk’ haha! I get to play a bit of organ and keys in that. And I’ve got another electro band I’m playing with at the moment. And any of my clients, if they’re playing shows I’ll often just jump in and help support in any way that I can.” There’s no doubt Guy is all about giving back to Gold Coast music. “I just love to have all my students, clients and friends sharing the music with me. That gives me a lot of pleasure and reward, by helping them fulfil their dreams. I see the passion in their eyes when they’re scratching to write and record that song in them. That’s their dream and their life, they’ve put everything into it. This is who they are and I’m so honoured that they share that with me.” “Music is a moral law. It gives soul to the universe, wings to the mind, flight to the imagination and charm and gaiety to everything.” This quote by Plato, which adorns the homepage of the Human Records website, encapsulates the esteem in which Guy holds the art-form. Only a true and everlasting love of music could drive one to such feats of all encompassing devotion. Well done Guy Cooper, you are a true Gold Coast Music Champion in every sense of the word. Anthony Gebhardt 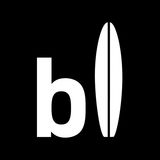