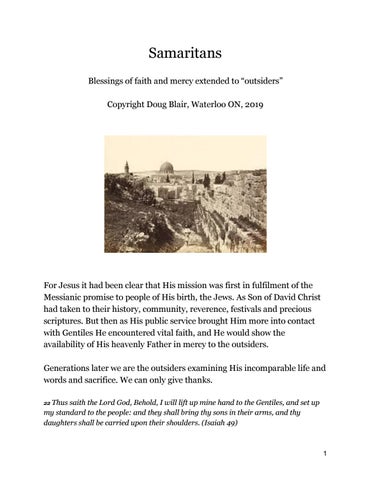 For Jesus it had been clear that His mission was first in fulfilment of the Messianic promise to people of His birth, the Jews. As Son of David Christ had taken to their history, community, reverence, festivals and precious scriptures. But then as His public service brought Him more into contact with Gentiles He encountered vital faith, and He would show the availability of His heavenly Father in mercy to the outsiders. Generations later we are the outsiders examining His incomparable life and words and sacrifice. We can only give thanks. 22 ​Thus

saith the Lord God, Behold, I will lift up mine hand to the Gentiles, and set up my standard to the people: and they shall bring thy sons in their arms, and thy daughters shall be carried upon their shoulders. (Isaiah 49)

As if for her alone He came to tell That she was through with daily thirst And shameful gossip-thrust How did He know Those desperate years of License and of lust? A prophet, true And one who spoke Of waters to impart No mocker He Serenity Contentment for her heart. So off she ran

â&amp;#x20AC;&amp;#x153;Come see the man Who knows my every deed Forgives it all, The big, the small And leaves my conscience freed. Yes drink of Him The fresh supply of Spirit without end.â&amp;#x20AC;? They came, they heard. They took His word And hailed Him as their friend.

Robbed ​(arrives the neighbourly Samaritan) Robbed, stripped, abandoned Of every hope and plan And dropped here, and left for dead Would no one help the man? Religion in its busy-ness Was quick to pass on by Tradition simply crossed the road Lest duty would espy. But then a fellow traveler Who knew the risks around Came close, in earshot of his moans And stooped toward the ground And stopped his beast, a gentle ass Who silently observed The mercy, drink and helping hand With which his Master served. And lifted up the drooping frame And walked while patient rode And gave the world this timeless charge To bear a neighbour&#39;s load.

Were there not ten With my blessing Leprous one moment, and then, Sent for the priest’s Absolution,

Was there but one Back to thank me? He, a Samaritan too. Shameless he bows. Adoration. Here at the feet of a Jew.

Oh thereâ&amp;#x20AC;&amp;#x2122;s much more For the thankful. Those who remember each grace. They are made whole

From the inside. They shall discover my face.

I’ll not be shaken off, not I My daughter writhes at home And I have heard Your healing power The greatest ever known Disciples bar me from your touch

No Jewish blood to show But Son of David Lord of life I will not let you go. A hopeful “dog” That’s what you said The household pet I’m sure And crumbs that fall From sacred feast Will more than prove the cure. So come now Jesus Speak the word And healing now translate And end this Mother’s heaviness

The Centurion by James Tissot

The good leader has already proved that he too can be led with order, dignity and respect. In the story of the healing of the centurionâ&amp;#x20AC;&amp;#x2122;s servant by Jesus (Luke 7 and Matthew 8) a very interesting principle is demonstrated. The centurion, a Gentile, is greatly troubled by the serious illness of his servant, and he decides to petition the One in the area who has proved His authority over illness and other troubles of the human conditionâ&amp;#x20AC;Ś Jesus. Part way through the process the messengers of the Roman respectfully suggest that Jesus need not trouble Himself to attend personally. Rather that He simply speak the word of authority over powers of darkness and the man no doubt will be healed. Jesus marvels at this kind of faith and gives exactly what is desired with a word. No visit. No laying on of hands. No application of herb, ointment or potion. No speaking within earshot of the infirm. The centurion had said the following: 7Wherefore neither thought I myself worthy to come unto thee: but say in a word, and my servant shall be healed.

8For I also am a man set under authority, having under me soldiers, and I say unto one, Go, and he goeth; and to another, Come, and he cometh; and to my servant, Do this, and he doeth it. With the use of that one word “also” the Roman was affirming that Jesus was qualified to take charge here because He had shown Himself dedicated and obedient to the One above Him; not a Caesar in this case but a higher heavenly Lord who masters the elements and eventualities of earth. On this incident Charles Spurgeon has said: “He (the centurion) would not put the Lord Jesus to such trouble as to come to his house. He felt unworthy to be served at such a cost by such a Lord. He argues that a word will do it all. He was under authority himself, and hence his power to exercise authority over others. He believed that the Lord Jesus had a commission also from the supreme power, and that this would gird him with command over all the minor forces of the universe, a command which he could exercise from a distance with a single word.” I am reminded of another piece of scripture along the same line in ​Hebrews 5:

8Though he were a Son, yet learned he obedience by the things which he suffered; 9And being made perfect, he became the author of eternal salvation unto all them that obey him; It was Jesus’ obedience and meek submission to the will of the Father that fitted Him to be the Captain of our salvation. In His earth walk He demonstrated that He too was obligated to submit to the holy observances of His community (baptism, temple worship, alms to the poor, the Jewish feasts). In His public ministry He repeatedly affirmed that He did and said only that which was instructed by the Father. Such obedience was a sweet savour to God. It also assured the community (and ourselves) that He was and is a worthy priest and representative, identifying totally with our given lot in this world, persevering through it all, staying clear of sin and offering sympathetic petitions to God on our behalf. This was the “truly man” part of His commission. The “truly God” part was veiled for a time and would have to await the resurrection.

Ryan, the priest-novitiate nudged his superior in the arm and pointed to a pew mid-way down the sanctuary on the right side. &quot;There he is again. Same time almost every day. Looks around and then just sits there for about twenty minutes. Sort of a seamy looking character. I wonder if he means well? Remember the recent thievery?&quot; Monseigneur quietly examined the old fellow in the dwindling late afternoon light. Quiet surroundings. Votive candles flickering nearby. Archie practicing some Bach on the organ up front. Nothing to worry about.

Just sitting there. Head slightly bowed. Old tweed overcoat. Peaked winter cap in hand... The two men went on to other matters. But then the simple visitor stopped showing. One day in a hospital visitation, Ryan had left a parishioner&#39;s bedside and was headed for the elevator when he noticed the old fellow propped up in a bed in a four-patient ward room. He yielded to the temptation to drop in for a short visit. After introductions he learned that &quot;Patrick&quot;, a retired machinist and widower, had been in for about eight days following a surgical procedure of some complexity. There followed some small talk about children and grandchildren in distant cities and Patrick&#39;s interests and pass-times in retirement. Finally curiosity brought Ryan around to the subject of the elder&#39;s daily church stops. &quot;Oh that&#39;s really quite simple. I love the feel of the place. The quiet. The Gospel pictures. The courtesy. The candles. Any music is a bonus. My wife periodically came to St. Mark&#39;s. I didn&#39;t. But now I come to pray.&quot;

&quot;If you don&#39;t mind my asking, what sorts of prayers do you lift up. I&#39;m a great student of prayer.&quot; &quot;Not much I guess. I sit down. Settle myself. Think of Heaven. Think of the many good things that have come my way. Think of ways to improve. Remember some friends. Quietly, I say something like, â&amp;#x20AC;&amp;#x2039;&#39;Hello Jesus, it&#39;s Patrick&#39;â&amp;#x20AC;&amp;#x2039;. Then I wait for about ten more minutes. That&#39;s all.&quot; A few more tidbits were exchanged. Then the handshake. The departure. But Ryan had resolved to pay another visit soon. The opportunity came the following Monday. On the seventh floor at the nurse&#39;s station, Ryan thought to stop and inquire about the patient&#39;s progress. He was told,&quot;That Patrick is remarkable. Never a complaint. Always a hopeful glimmer in his eyes. Pleasant sense of humour. Often able to get the other patients in his room talking about something interesting. A real treat.&quot; Bedside, Ryan brought up the nurse&#39;s good report to the mysterious man. &quot;Oh, that&#39;s all thanks to my visitor. He comes at break of day and stands at the end of my bed. I have always been an early riser. This hospital isn&#39;t going to change that. Expect to be out of here in three more days.&quot;

Blessings of faith and mercy extended to outsiders 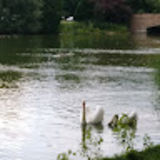