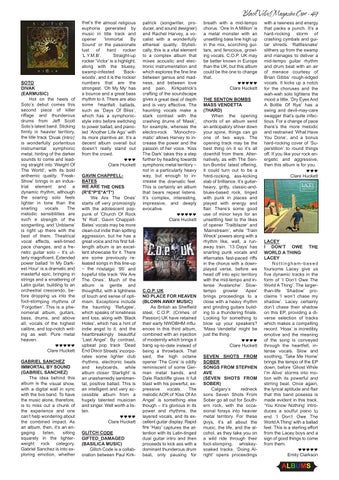 SOTO DIVAK (EARMUSIC) Hot on the heels of Soto’s debut comes this second piece of killer riffage and thunderous drums from Jeff Scott Soto’s latest band. Sticking firmly in heavier territory, the title track ‘Divak (Intro)’ is wonderfully portentous instrumental symphonic metal, hinting of the darker sounds to come and leading straight into ‘Weight Of The World’, with its bold anthemic quality. ‘FreakShow’ brings in an industrial element and a dynamic rhythm, although the soaring solo feels lighter in tone than the snarling vocals. The melodic sensibilities are such a strength of the songwriting, and ‘Unblame’ is right up there with the best of them. Theatrical vocal effects, well-timed pace changes, and a frenetic guitar solo – it’s utterly magnificent. Extended power ballad ‘In My Darkest Hour’ is a dramatic and masterful epic, bringing in strings and a smattering of Latin guitar, building to an orchestral crescendo, before dropping us into the foot-stomping rhythms of ‘Forgotten’. This is a phenomenal album, guitars, bass, drums, and above all, vocals of the highest calibre, and top-notch writing as well. Pure metal heaven. YYYYY

GABRIEL SANCHEZ IMMORTAL BY SOUND (GABRIEL SANCHEZ) The idea behind this album is the visual show, with a digital wall in sync with the live band. To have the music alone, therefore, is to miss out a chunk of the experience and one can’t help wondering about the combined impact. As an album, then, it’s an engaging listen, sitting squarely in the lighterweight rock category. Gabriel Sanchez is into exploring emotion, whether

that’s the almost religious euphoria generated by music in title track and opener ‘Immortal By Sound’ or the passionate lust of hard rocker ‘L.Y.M.B’. Straight-up rocker ‘Victor’ is a highlight, along with the bluesy, swamp-infested ‘Backwoods’, and it is the rockier numbers that are the strongest. ‘Oh My My’ has a bounce and a great bass rhythm to it. There are also some heartfelt ballads, such as ‘Days Of Bliss’, which has a symphonicstyle intro before switching to power ballad, and pianoled ‘Another Life Ago’ with its more plaintive air. It’s a decent album overall but doesn’t really stand out from the crowd. YYY

GAVIN CHAPPELLBATES WE ARE THE ONES (R*E*P*E*A*T*) ‘We Are The Ones’ starts off very promisingly with the adolescent poppunk of ‘Church Of Rock ‘N’ Roll’. Gavin ChappellBates’ vocals may be more clean-cut indie than spitting aggression, but he has a great voice and his first fulllength album is an excellent showcase for it. There are some previously released songs in this line-up – the nostalgic ‘95’ and hopeful title track ‘We Are The Ones’. Much of the album is gentle and thoughtful, with a lightness of touch and sense of optimism. Exceptions include the haunting ‘Refugee’, which speaks of loneliness and loss, along with ‘Black Holes’, which has a hint of indie angst to it, and the heartbreakingly beautiful ‘Last Angel’. By contrast, upbeat pop track ‘Dead End Disco Streets’ incorporates some lighter club rhythms, electronic beats and keyboards, while album closer ‘Starlight’ is an unashamedly sentimental, positive ballad. This is an intelligent and very accessible album from a hugely talented musician and singer. Well worth a listen. YYYY

patrick (songwriter, producer, and sound designer) and Rachel Harvey, a vocalist with a wonderfully ethereal quality. Stylistically, this is a vital element to a complex album that mixes acoustic and electronic instrumentation and which explores the fine line between genius and madness, and between love and pain. Kirkpatrick’s crafting of the soundscape gives a great deal of depth and is very effective. The haunting vocals make a stark contrast with the crashing drums of ‘Mask’, for example, whereas the electro-rock ‘Monochromatic’ allows Harvey to increase the power and the passion of her voice. ‘Kiss The Dark’ takes this a step further by heading towards symphonic metal territory – not in a particularly heavy way, but enough to increase the dramatic feel. This is certainly an album that bears repeat listens. It’s complex, interesting, impressive, and deeply evocative. YYYYY

C.O.P. UK NO PLACE FOR HEAVEN (BLOWN AWAY MUSIC) As British as Sheffield steel, C.O.P. (Crimes of Passion) UK have retained their early NWOBHM influences in this third album, combined with an injection of modernity which brings it bang up-to-date instead of being a throwback. That said, the high octane opener ‘The Core’ is oddly reminiscent of some German metal bands, and Dale Radcliffe gives it full blast with his powerful, expressive vocals. The melodic AOR of ‘Kiss Of An Angel’ is something else though – it’s glorious in its power and rhythms, the layered vocals, and its excellent guitar display. Rapid fire ‘Halo’ captures the attention with its Latin-tinged dual guitar intro and then proceeds to kick ass with a dominant thunderous drum beat, only pausing for

breath with a mid-tempo chorus. ‘One In A Million’ is a metal monster with an unsettling bass line high up in the mix, scorching guitars, and ferocious, growling vocals. C.O.P. UK may be better known in Europe than the UK, but this album could be the one to change that. YYYYY

THE SENTON BOMBS MASS VENDETTA (7HARD) When the opening chords of an album send an anticipatory shiver down your spine, things can go one of two ways. The opening track may be the best thing on it so it’s all downhill from there. Alternatively, as with The Senton Bombs’ latest offering, it could turn out to be a hard-rocking, ass-kicking slab of brilliance. It’s guitarheavy, gritty, classic-andblues-based rock, tinged with punk in places and played with energy and flair. There’s some good use of minor keys for an unsettling feel to the likes of opener ‘Trailblazer’ and ‘Mainstream’, while ‘Train Wreck’ powers along with a rhythm like, well, a runaway train. ’13 Days’ has snarling punk vocals and alternates fast-paced riffs in the chorus with a downplayed verse, before we head off into epic territory with the mid-tempo and intense ‘Avalanche’. Slowtempo growler ‘Apex’ brings proceedings to a close with a heavy rhythm and grinding guitars building to a thundering finale. Looking for something to blow up your speakers? ‘Mass Vendetta’ might be just the thing. YYYY

SEVEN SHOTS FROM SOBER SONGS FROM STEPHEN AVE (SEVEN SHOTS FROM SOBER) Calgary’s redneck sons Seven Shots From Sober go all out for Southern rock, with the occasional forays into heavier metal territory. For these guys, it’s all about the music, the life, and the alcohol, as they take you on a wild ride through their foot-stomping, whiskeysoaked tracks. ‘Doing Alright’ opens proceedings

with a rawness and energy that packs a punch. It’s a hard-rocking storm of crashing cymbals and guitar shreds. ‘Rattlesnake’ slithers up from the swamp and manages to deliver a mid-tempo guitar rhythm and drum beat with an air of menace courtesy of Brian Gibbs’ rough-edged vocals. It kicks up a notch for the choruses and the wah-wah solo lightens the mood a little. ‘Dry Eyes And A Bottle Of Rye’ has a swing and devil-may-care swagger that’s quite infectious. For a change of pace there’s the more melodic and restrained ‘What Have You Done’, and a bonus hard-rocking cover of ‘Superstition’ to round things off. If you like your rock energetic and aggressive, then this album is for you. YYY

LACEY I DON’T OWE THE WORLD A THING LACEY Nottingham-based foursome Lacey give us five dynamic tracks in the form of ‘I Don’t Owe The World A Thing’. The largerthan-life ‘Shadow’ proclaims ‘I won’t chase my shadow’. Lacey certainly don’t chase their shadow on this EP, providing a diverse selection of tracks which makes a compelling record. ‘Hoax’ is incredibly emotive and the meaning of the song is conveyed through the heartfelt, intense vocals. Slow and soothing, ‘Take Me Home’ brings the tempo of the EP down, before ‘Ghost While I’m Alive’ storms into motion with its powerful and stirring beat. Once again, the lyrical aptitude and flair that this band posesss is made evident in this track. ‘You Know Nothing’ introduces a soulful piano to end ‘I Don’t Owe The World A Thing’ with a ballad feel. This is a sterling effort from the Lacey boys and a sign of good things to come from them. YYYYY 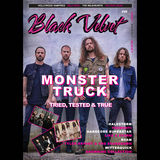