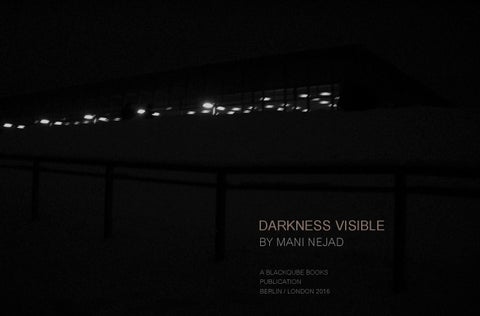 IDEA AND CONCEPT "Darkness Visible" has been made possible by a joint creative initiative of an artist, designer and writer team that set off to compose a series of images that move between mysterious abstraction and intense explorations of the real. With objects, materiality and architectural detail being key to the project Berlin-based artist Mani Nejad engaged in a study of formal aesthetics that draws from the dramatic qualities of darkness and contrasting light as well as from the sculptural presence of unusual objects. In order to make the experience of this two year photo project accessible to a wider audience "Darkness Visible" was devised as a print and digital book that is complemented by a Collector's Edition combining the book and a signed limited archival pigment print of one of the images. Blackqube happily published this extraordinary visual journey and would like to thank all contributors for their strong commitment, creative input and steadfast support. This volume is part of Blackqube Books' endeavor to promote and foster creative work of high aesthetic and artistic value. More information on this publication, Blackqube Books and Magazine as well as the artist is to be found at blackqube.de. Darkness Visible I p 3/ 88 —––––––––––––––––––––––

TABLE OF CONTENTS 07 ABOUT THIS BOOK ON THE IDEA AND CONCEPT OF DARKNESS VISIBLE 21 GRADATIONS OF THE DARK ON THE SCULPTURAL QUALITIES OF LIGHT 39 SPATIAL FRAGMENTATIONS HOW TO SENSE AND IMAGINE DIMENSION 57 THE LATENT FORM DARK MATTER AND THE SINGLE PIECE OBJECT 75 ASIDES ABOUT MANI NEJAD & INDEX OF IMAGES Darkness Visible . 5 of 66 —––––––––––––––––––––––

ABOUT THIS BOOK Darkness Visible is a visual journey through urban landscapes portraying their structural and formal qualities. Conceived as a black and white study it presents a narrative of fictional minimalism that is drawn from real places in present time. The scenes and views speak a distinct aesthetic language that sets these works apart from the genre of classic city portraiture as we know it. All of the images have been shot between dusk and dawn with the idea to set the stage in this certain mood of in-between: When greyscales prevail and the many hues of black suddenly get noticed, when the scene is dark and yet objects can be clearly discerned. When ambiguities would allow for a stream of consciousness through associations - searching for tales filled with wonder and surprise. Key to the book is the idea of exploring proportion and dimension in existing architectural environments and translating them into aesthetic compositions in their own right. Using a monochrome palette of black and white seems only logic in order to work out the essence of light and shadow and the stunning geometries that emerge from this pure form of energy. Darkness Visible also pays homage to the notion of the void and its hidden dramatic power. Moments have been caught that are home to the enigma of twilight and an exclusive restraint to object and space. Life that breathed through streets during the day just dimly reverberates with echoes in the dark. Darkness Visible . 7 of 66 —––––––-–––––––––––––––––

GRADATIONS OF DARK Maybe the core of what makes photography still so uniquely fascinating is its almost inescapable necessity of dealing with light in various ways and modes. In the case of Darkness Visible the focus is mostly on the relation between light and space and how we see the space because of light, and how we see the light because of the space and materials. This relation is a fundamental one - best described by the words of American architect Louis Kahn: “The sun never knew how great it was until it struck the side of a building”. In this sentence Kahn summarizes a photographic imperative and emphasizes how a building's or an object's atmospheric qualities are created through the interaction between structure and natural light. Seen in this context, the artist is less preoccupied with the light needed to create a photograph but more with the photograph’s ability to articulate the revealing journey of light through a scene. The qualities of light as well as the feeling of coming out of the dark are both elements that are strongly defining the work of Mani Nejad. Apart from aspects of void and restraint it is also the preoccupation with the black and white image, its possibilities in terms of contrasts and nuances that drives the artist in his formal and aesthetic approach. Attention is often drawn to parts of buildings or objects that are either heavily shadowed or pointedly flooded with light. This will prompt the viewer to piece together a sense of emotion related to space and its sculptural qualities. Darkness Visible . 21 of 66 —––––––-––––––––––––––––

SPATIAL FRAGMENTS This series is not so much about describing or documenting a certain space or environment but rather about enabling the viewer to sense and imagine dimension, form and aesthetic rhythm. Mani Nejad often opts for close-ups or clippings in a specific scene - and through the use of crops, shadows and sharp angles he manages to transform former concrete views and concepts into pictorial realms that are open for a broader range of interpretation and narrative. Being taken out of their larger context these individualized, focused views gain additional attention and are now imbued with meaning - thus perceived in a different, more intense way. The resulting spatial fragmentations are suggesting ideas in the viewer's imagination and he will then be able to create a personal notion of what is seen. Due to their abstract nature each of the images delivers a visceral effect while also opening up a virtual sphere for the audience to project their ideas on. They form a pictorial space as much as they are the representation of something real. Subject matter that is taken from the stock of our daily lives suddenly triggers a new look within an unexpected repertoire. The images can also be seen as a kind of trompe l'oeil game that expands the question raised by this book into the history of abstraction itself: how do we acutally navigate images - their surface and depth, their exterior and interior relations, their depiction and interpretations. Darkness Visible . 35 of 66 —––––––––––-––––––––––––

THE LATENT FORM While working on Darkness Visible with its focus on urban landscapes and spatial compositions there were moments of fascination and surprise when encountering individual objects that stood out due to their strong sculptural language as well as their startling presence and immediacy. It became clear that these "objets trouvés" should be included in the series as striking examples of extraordinary singular pieces that are creating whole stories with a highlight on material character and manage to resonate with meaning and content. Simply by being there they trigger associations, revive memories and recall experience. It happens that individual objects are at times more prominent within a visual performance than the overall image of a whole environment. The scenic view can be disappointing and blurred in its message while the single object is precise and near, demanding full attention, not allowing any kind of distraction. Objects therefore can create strong emotion and suggestion although they're just picked-up impressions while walking the streets - they could be described as the visual version of poetry: observations strung together to inspire reflection. Working within the parameters of exploring the object's performance and how it is perceived, here is carefully selected suite that points to the universe of "the small things". Darkness Visible . 47 of 66 —––––––––––––––––––––––

ABOUT THE ARTIST In his work Berlin based artist Mani Nejad strives to transcend classic definitions and separations of art forms and genres implementing rather an integrated aesthetic and artistic approach. Drawing on various reference and media Mani Nejad often engages structural patterns such as layers, cuttings and remixes as well as random momentum and autogeneric processes. The artist holds an MBA of visual arts of Kunstakademie München / Academy of Art Munich and has been presenting his work in various formats – exhibitions, installations and publications in Europe, USA and Canada. His works are also to bae found in private and public collections. Blackqube has cooperated with Mani Nejad on a number of publications. This book, which is available as a print version and as an ebook, is presented on the occasion of an exhibition curated by Blackqube. For further reference visit www.blackqube.de or see the artist’s website at www.mani-nejad.de Darkness Visible . 59 of 66 —–––––––––––––––––––––– 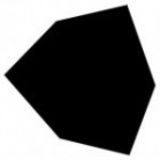 Enjoy this visual journey through urban landscapes portraying their structural and formal qualities - conceived as a black and white study.

Enjoy this visual journey through urban landscapes portraying their structural and formal qualities - conceived as a black and white study.