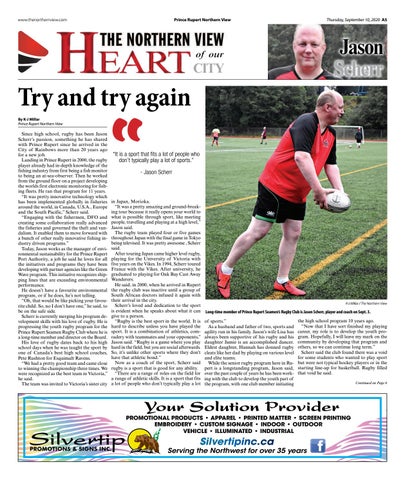 Since high school, rugby has been Jason Scherr’s passion, something he has shared with Prince Rupert since he arrived in the City of Rainbows more than 20 years ago for a new job. Landing in Prince Rupert in 2000, the rugby player already had in-depth knowledge of the fishing industry from first being a fish monitor to being an at-sea-observer. Then he worked from the ground floor on a project developing the worlds first electronic monitoring for fishing fleets. He ran that program for 11 years. “It was pretty innovative technology which has been implemented globally in fisheries around the world, in Canada, U.S.A., Europe and the South Pacific,” Scherr said. “Engaging with the fishermen, DFO and creating some collaboration really advanced the fisheries and governed the theft and vandalism. It enabled them to move forward with a bunch of other really innovative fishing industry driven programs.” Today, Jason works as the manager of environmental sustainability for the Prince Rupert Port Authority, a job he said he loves for all the initiatives and programs they have been developing with partner agencies like the Green Wave program. This initiative recognizes shipping lines that are exceeding environmental performance. He doesn’t have a favourite environmental program, or if he does, he’s not telling. “Oh, that would be like picking your favourite child. So, no I don’t have one,” he said, to be on the safe side. Scherr is currently merging his program development skills with his love of rugby. He is progressing the youth rugby program for the Prince Rupert Seamen Rugby Club where he is a long-time member and director on the Board. His love of rugby dates back to his high school days when he was taught the sport by one of Canada’s best high school coaches, Pete Rushton for Esquimalt Ravens. “We had a pretty good team and came close to winning the championship three times. We were recognized as the best team in Victoria,” he said. The team was invited to Victoria’s sister city

“It is a sport that fits a lot of people who don’t typically play a lot of sports.” - Jason Scherr

in Japan, Morioka. “It was a pretty amazing and ground-breaking tour because it really opens your world to what is possible through sport, like meeting people, travelling and playing at a high level,” Jason said. The rugby team played four or five games throughout Japan with the final game in Tokyo being televised. It was pretty awesome , Scherr said. After touring Japan came higher level rugby, playing for the University of Victoria with five years on the Vikes. In 1994, Scherr toured France with the Vikes. After university, he graduated to playing for Oak Bay Cast Away Wanderers. He said, in 2000, when he arrived in Rupert the rugby club was inactive until a group of South African doctors infused it again with their arrival in the city. Scherr’s loved and dedication to the sport is evident when he speaks about what it can give to a person. “Rugby is the best sport in the world. It is hard to describe unless you have played the sport. It is a combination of athletics, comradery with teammates and your opponents,” Jason said. “Rugby is a game where you play hard in the field, but you are social afterwards. So, it’s unlike other sports where they don’t have that athletic bond.” Now as a coach of the sport, Scherr said rugby is a sport that is good for any ability. “There are a range of roles on the field for a range of athletic skills. It is a sport that fits a lot of people who don’t typically play a lot

Long-time member of Prince Rupert Seamen’s Rugby Club is Jason Scherr, player and coach on Sept. 3. of sports.” As a husband and father of two, sports and agility run in his family. Jason’s wife Lisa has always been supportive of his rugby and his daughter Jamie is an accomplished dancer. Eldest daughter, Hannah has donned rugby cleats like her dad by playing on various level and elite teams. While the senior rugby program here in Rupert is a longstanding program, Jason said, over the past couple of years he has been working with the club to develop the youth part of the program, with one club member initiating

the high school program 10 years ago. “Now that I have sort finished my playing career, my role is to develop the youth program. Hopefully, I will leave my mark on the community by developing that program and others, so we can continue long term.” Scherr said the club found there was a void for some students who wanted to play sport but were not typical hockey players or in the starting line-up for basketball. Rugby filled that void he said.

WWW. SILVERTIPINC.CA Serving the Northwest for over 35 years 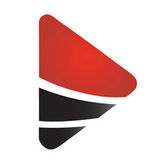