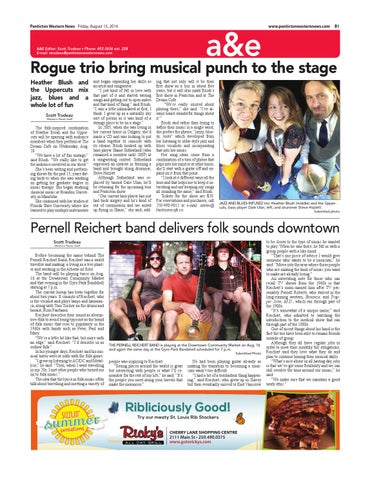 The folk-inspired combination of Heather Blush and the Uppercuts will be sparring with audience members when they perform at The Dream Cafe on Wednesday, Aug. 20. “We have a lot of fun onstage,” said Blush. “We really like to get the audience involved in our show.” She’s been writing and performing shows for the past 15, years dating back to when she was working on getting her graduate degree in music therapy. She began studying classical music at Brandon University in Manitoba. She continued with her studies at Florida State University where she learned to play multiple instruments

and began expanding her skills as an artist and songwriter. “I just kind of fell in love with that part of it and started writing songs and getting out to open mikes and that kind of thing,” said Blush. “I was a little intimidated at first, I think. I grew up as a naturally shy sort of person so it was kind of a strange place to be on a stage.” In 2005, when she was living in her current home in Calgary, she’d made a CD and was looking to put a band together to coincide with its release. Blush hooked up with bass player Shane Sutherland (who remained a member until 2009) at a songwriting contest. Sutherland expressed an interest in forming a band and brought along drummer, Steve Hazlett. Although Sutherland was replaced by bassist Dale Ulan, he’ll be returning for the upcoming tour and Penticton show. “Our current bass player has just had back surgery and he’s kind of out of commission and we ended up flying in Shane,” she said, add-

ing that not only will it be their first show as a trio in about five years, but it will also mark Blush’s first show in Penticton and at The Dream Cafe. “We’re really excited about playing there,” she said. “I’ve always heard wonderful things about it.” Blush said rather than trying to define their music in a single word, she prefers the phrase, “jazzy, bluesy, roots” which developed from her listening to older-style jazz and blues vocalists and incorporating that into her music. Her song ideas come from a combination of a turn of phrase that pops into her mind or at other times, she’ll start with a guitar riff and expand on it from that point. “I look at it different ways all the time and that helps me to keep it interesting and not keeping my songs all sounding the same,” said Blush. Tickets for the show are $20. For reservations and purchases, call 250-490-9012 or e-mail: admin@ thedreamcafe.ca.

Before becoming the name behind The Pernell Reichert Band, Reichert was a world traveller and making a living as a tree planter and working in the Alberta oil field. The band will be playing twice on Aug. 16 at the Downtown Community Market and that evening in the Gyro Park Bandshell starting at 7 p.m. The current lineup has been together for about two years. It consists of Reichert, who is the vocalist and plays banjo and harmonica, along with Tom Tischer on the drums and bassist, Ross Fairbairn. Reichert describes their sound as alternative-folk to avoid being typecast as the brand of folk music that rose to popularity in the 1960s with bands such as Peter, Paul and Mary. “We’re a little bit like that, but more with an edge,” said Reichert. “I’d describe us as outlaw folk.” In his younger days, Reichert said his musical tastes were at odds with the folk genre. “I grew up listening to AC/DC and Metallica,” he said. “Then, when I went travelling in my 20s, I met other people who turned me on to folk music.” The idea that the lyrics in folk music often talk about travelling and meeting a variety of

THE PERNELL REICHERT BAND is playing at the Downtown Community Market on Aug. 16 and again the same day at the Gyro Park Bandshell scheduled for 7 p.m.

people was inspiring to Reichert. “Seeing places around the world is great but interacting with people is what I’ll remember for the rest of my life,” he said. “It’s the people you meet along your travels that make the memories.”

He had been playing guitar already so making the transition to becoming a musician wasn’t too difficult. “I had a bit of a troubadour thing happening,” said Reichert, who grew up in Surrey but then eventually moved to East Vancover

to be closer to the type of music he wanted to play. When he was there, he fell in with a group people with a like mind. “That’s one piece of advice I would give someone who wants to be a musician,” he said. “Move into the area where those people who are making the kind of music you want to make are already living.” An interesting note for those who can recall TV shows from the 1960s is that Reichert’s mom named him after TV personality Pernell Roberts, who starred in the long-running western, Bonanza, and Trapper John, M.D., which ran through part of the 1980s. “It’s somewhat of a unique name,” said Reichert, who admitted to watching the introduction to the medical show that ran through part of the 1980s. One of nicest things about his band is the fact the trio have been able to remain friends outside of group. Although they all have regular jobs in order to meet their monthly bill obligations, Reichert said they love what they do and plan to continue honing their musical skills. “What’s nice about us all having day jobs is that we’ve got some flexibility and we can still revolve the time around our music,” he said. “We make sure that we maintain a good work ethic.”