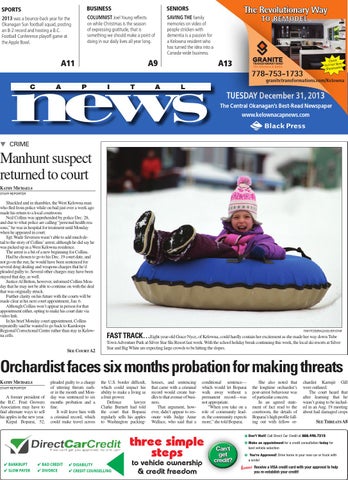 2013 was a bounce-back year for the Okanagan Sun football squad, posting an 8-2 record and hosting a B.C. Football Conference playoff game at the Apple Bowl.

COLUMNIST Joel Young reflects on while Christmas is the season of expressing gratitude, that is something we should make a point of doing in our daily lives all year long.

SAVING THE family memories on video of people stricken with dementia is a passion for a Kelowna resident who has turned the idea into a Canada-wide business. Get the beauty and durability of granite without the messy demolition.

The Revolutionary Way TO REMODEL

Nature Made Granite. We Made It Better.

Nature Made Granite. A9 We Made It Better. A13

Check out our New Showroom!

Get the beauty and durability of granite without the messy demolition.

*Minimum purchase required. May not be combined with

Shackled and in shambles, the West Kelowna man who fled from police while on bail just over a week ago made his return to a local courtroom. Neil Collins was apprehended by police Dec. 28, and due to what police are calling “personal health reasons,” he was in hospital for treatment until Monday when he appeared in court. Sgt. Wade Seversen wasn’t able to add much detail to the story of Collins’ arrest, although he did say he was picked up in a West Kelowna residence. The arrest is a bit of a new beginning for Collins. Had he chosen to go to his Dec. 19 court date, and not go on the run, he would have been sentenced for several drug dealing and weapons charges that he’d pleaded guilty to. Several other charges may have been stayed that day, as well. Justice Al Betton, however, informed Collins Monday that he may not be able to continue on with the deal that was originally struck. Further clarity on his future with the courts will be made clear at his next court appointment, Jan. 6. Although Collins won’t appear in person for that appointment either, opting to make his court date via video link. In his brief Monday court appointment, Collins repeatedly said he wanted to go back to Kamloops Regional Correctional Centre rather than stay in Kelowna cells. See Court A2

FAST TRACK…Eight-year-old Grace Nyce, of Kelowna, could hardly contain her excitement as she made her way down Tube

A former president of the B.C. Fruit Growers Association may have to find alternate ways to sell his apples in the new year. Kirpal Boparai, 52,

pleaded guilty to a charge of uttering threats earlier in the month and Monday was sentenced to six months probation and a fine. It will leave him with a criminal record, which could make travel across

the U.S. border difficult, which could impact his ability to make a living as a fruit grower. Defence lawyer Clarke Burnett had told the court that Boparai regularly sells his apples to Washington packing-

houses, and sentencing that came with a criminal record would create hurdles to that avenue of business. That argument, however, didn’t appear to resonate with Judge Anne Wallace, who said that a

conditional sentence— which would let Boparai walk away without a permanent record—was not appropriate. “When you take on a role of community leader, the community expects more,” she told Boparai.

She also noted that the longtime orchardist’s post-arrest behaviour was of particular concern. In an agreed statement of fact read to the courtroom, the details of Boparai’s high profile falling out with fellow or-

chardist Karmjit Gill were outlined. The court heard that after learning that he wasn’t going to be included in an Aug. 19 meeting about hail damaged crops

You’re Approved! Drive home in your new car or truck with a smile!

bonus Receive a VISA credit card with your approval to help you re-establish your credit!