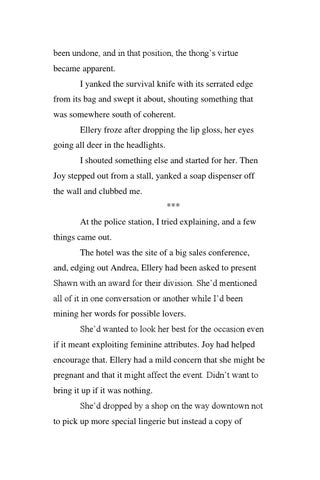 been undone, and in that position, the thong’s virtue became apparent. I yanked the survival knife with its serrated edge from its bag and swept it about, shouting something that was somewhere south of coherent. Ellery froze after dropping the lip gloss, her eyes going all deer in the headlights. I shouted something else and started for her. Then Joy stepped out from a stall, yanked a soap dispenser off the wall and clubbed me. *** At the police station, I tried explaining, and a few things came out. The hotel was the site of a big sales conference, and, edging out Andrea, Ellery had been asked to present Shawn with an award for their division. She’d mentioned all of it in one conversation or another while I’d been mining her words for possible lovers. She’d wanted to look her best for the occasion even if it meant exploiting feminine attributes. Joy had helped encourage that. Ellery had a mild concern that she might be pregnant and that it might affect the event. Didn’t want to bring it up if it was nothing. She’d dropped by a shop on the way downtown not to pick up more special lingerie but instead a copy of 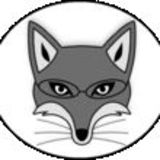