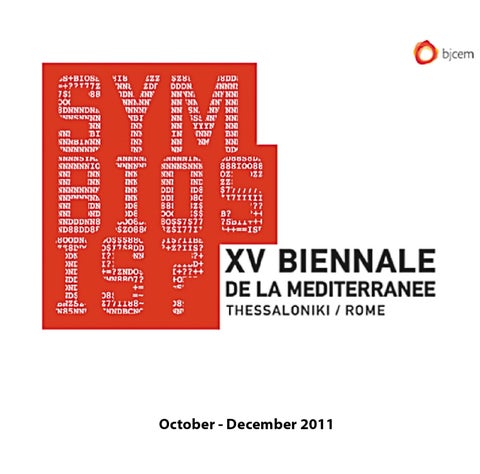 XV BIENNALE DE LA MEDITERRANEE The XVth Biennial proposed some important innovations. The name of the event changed from Biennial of Young Artists from Europe and the Mediterranean to Biennale de la MĂŠditerranĂŠe, with the aim to focus more and more on the Mediterranean area and its social, political and cultural context. Furthermore, for the first time the event was produced in two stages, in different period of the year and with a specific program of activities, each of them hosted in a different city: Thessaloniki and Rome. A Biennial that from its title Symbiosis? offers, through the instrument of dialogue and artistic research, a coherent response to the need of learning how to live and plan together. Luigi Ratclif President

Thessaloniki October 6th â&#x20AC;&#x201C; November 6th 2011 Thessaloniki Port The Biennial in Thessaloniki was hosted mainly in the different warehouses of the Port. The disciplines presented were: Applied Arts, Gastronomy and Visual Arts.

This Biennial articulated its subject in the form of a question: Symbiosis?, as a clear and straightforward indication of the urgency of responding to a current question: how could we live together in the present? Curators were Christos Savvidis, Stephanie Bertrand, Efi Halivopoulou and Costanza Paissan. This project wanted to raise a series of questions and, at the same time, to provoke multiple answers, giving voice to conflicting positions within the framework of the Biennial.

The Biennial had a positive feedback concerning the audience: the public was assessed around 20.000 presences, during the month of events in Thessaloniki, and 2.000 presences in the two days of Rome. The audience was composed by a large number of young people; hundreds of practitioners, international artists; good presence of journalists on behalf of the most important national newspapers.

PRESENCES The selected artists were more than 250 coming from 27 Countries. The Biennial has been far more than the event itself: it was an occasion for a reach path of parallel events and workshops that our partners hosted in their territories and that, within several months, involved hundreds of artists and practitioners. Those activities were outlined to encourage the encounter among artists and produce works to be presented in the official program. Artists came from the following Countries: Albania, Algeria, Bosnia-Herzegovina, Croatia, Cyprus, Egypt, Finland, France, FYROM, Greece, Italy, Lebanon, Malta, Morocco, Montenegro, Palestine, Portugal, Republic of San Marino, Serbia, Slovenia, Spain, Turkey, Austria, Israel, Kosovo, Syria and UK.

A few months after the end of the Biennial we’ve sent to the artists and to our members a questionnaire through which they could express their judgments and opinions on the Biennial. They’ve been asked about the format, the quality of the set up, the hospitality, the satisfaction of both the technical and promotional aspects…

The questionnaire has been precious to highlight the weakest and the strongest aspects of the Biennial and to show us in which domains we need to make changes or improvements. The most significant result is the awareness of the need to improve the attentions towards the artists, mostly concerning the technical and logistics matters (36% of the artists complained about the set up of their works), as well as to increase the care of the promotional and communicational aspects (48% of the artists and 47% of the members pointed at promotion as the weakest aspect of the event). For this reason weâ&#x20AC;&#x2122;ve decided that the improvement of our communication strategy has to become one of our main goals for 2012, starting with important changes in that sense.

The event has been a collection of great moments, with strong works and pure talents. Here you have just few of them.

The great impact and deep emotion provoked by readings and concerts made for the first time ever in the beautiful hall of the MACRO museum, where, for the opening, performed, among others, the British collective Point Blank Poets and the French singer Scarlett Oâ&#x20AC;&#x2122;Hanna.

In Rome we also remember the great solo concert of Liburn Jupolli and its instrument, the octo, and the provocative performance of Khaled Jarrar and his stamp of the State of Palestine.

From Thessaloniki we remind some impressive installations as Anomalystic byÂ Didem Erk, Fears Fresh by Muhammad Ali or Government project - Egypt by Salma Badawi, just to mention very few of them.

In Thessaloniki also the parallel events also had a strong impact, as the Hotel Ariston project, Teenage Angst and Face Art.

In Hotel Ariston more than 80 artists have been in a residency program for a month in this amazing abandoned hotel.

The Teenage Angst exhibit by the Dynamo project space, dedicated to young artists under 18. Not to forget the politically incorrect intervention on the Student House faรงade by the famous street artist Blu.

WORKSHOPS Rome and Thessaloniki were also the opportunity to present the results of some workshops and seminars that were developed by our partners in preparation to the Biennial, as Touchstories, Urban Landscape Perspective and La Ville Ouverte.

THE XV BIENNALE DE LA MEDITERRANEE ON THE WEB

A special thank to all the organization who made possible this XV Biennial, included our partners all over Europe and Mediterranean, the Institution who promoted the event in Thessaloniki and Rome, the EACEA Education and Culture DG, â&#x20AC;&#x153;Youth in Actionâ&#x20AC;? Programme and our Donors (Lago, Cantine Nervi, Artegiovane).

on our Issuu channel you can also watch: 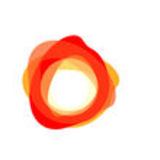