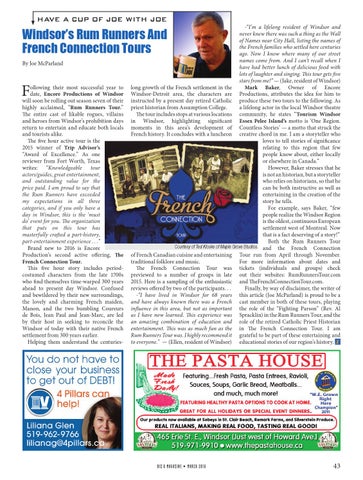 HAVE A CUP OF JOE WITH JOE

-“I’m a lifelong resident of Windsor and never knew there was such a thing as the Wall of Names near City Hall, listing the names of the French families who settled here centuries ago. Now I know where many of our street names come from. And I can’t recall when I have had better lunch of delicious food with lots of laughter and singing. This tour gets five stars from me!” — (Jake, resident of Windsor) long growth of the French settlement in the Mark Baker, Owner of Encore Windsor-Detroit area, the characters are Productions, attributes the idea for him to instructed by a present day retired Catholic produce these two tours to the following. As priest historian from Assumption College. a lifelong actor in the local Windsor theatre The tour includes stops at various locations community, he states “Tourism Windsor in Windsor, highlighting significant Essex Pelee Island’s motto is ‘One Region. moments in this area’s development of Countless Stories’ — a motto that struck the French history. It concludes with a luncheon creative chord in me. I am a storyteller who loves to tell stories of significance relating to this region that few people know about, either locally or elsewhere in Canada.” However, Baker stresses that he is not an historian, but a storyteller who relies on historians, so that he can be both instructive as well as entertaining in the creation of the story he tells. For example, says Baker, “few people realize the Windsor Region is the oldest, continuous European settlement west of Montreal. Now that is a fact deserving of a story!” Both the Rum Runners Tour Courtesy of Ted Kloske of Maple Grove Studios. and the French Connection of French Canadian cuisine and entertaining Tour run from April through November. traditional folklore and music. For more information about dates and The French Connection Tour was tickets (individuals and groups) check previewed to a number of groups in late out their websites: RumRunnersTour.com 2015. Here is a sampling of the enthusiastic and TheFrenchConnectionTour.com. reviews offered by two of the participants. . . Finally, by way of disclaimer, the writer of -“I have lived in Windsor for 68 years this article (Joe McParland) is proud to be a and have always known there was a French cast member in both of these tours, playing influence in this area, but not as important the role of the “Fighting Parson” (Rev. Al as I have now learned. This experience was Spracklin) in the Rum Runners Tour, and the an amazing combination of education and role of the retired Catholic Priest Historian entertainment. This was as much fun as the in The French Connection Tour. I am Rum Runners Tour was. I highly recommend it grateful to be part of these entertaining and to everyone.” — (Ellen, resident of Windsor) educational stories of our region’s history.

ollowing their most successful year to date, Encore Productions of Windsor will soon be rolling out season seven of their highly acclaimed, “Rum Runners Tour.” The entire cast of likable rogues, villains and heroes from Windsor’s prohibition days return to entertain and educate both locals and tourists alike. The five hour active tour is the 2015 winner of Trip Advisor’s “Award of Excellence.” As one reviewer from Fort Worth, Texas writes: “Knowledgeable tour actors/guides, great entertainment, and outstanding value for the price paid. I am proud to say that the Rum Runners have exceeded my expectations in all three categories, and if you only have a day in Windsor, this is the ‘must do’ event for you. The organization that puts on this tour has masterfully crafted a part-history, part-entertainment experience . . .” Brand new to 2016 is Encore Production’s second active offering, The French Connection Tour. This five hour story includes periodcostumed characters from the late 1700s who find themselves time-warped 300 years ahead to present day Windsor. Confused and bewildered by their new surroundings, the lovely and charming French maiden, Manon, and the two bumbling Coureurs de Bois, Jean Paul and Jean-Marc, are led by their host in seeking to reconcile the Windsor of today with their native French settlement from 300 years earlier. Helping them understand the centuries-

It is staycation time! Instead of spending money on a trip away, why not invest in your home so your family can enjoy it all year long? Our...

It is staycation time! Instead of spending money on a trip away, why not invest in your home so your family can enjoy it all year long? Our...