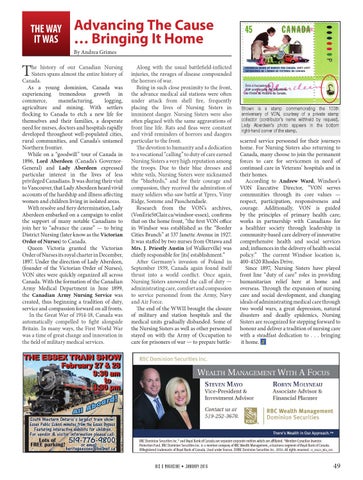 THE WAY IT WAS

Advancing The Cause … Bringing It Home By Andrea Grimes

he history of our Canadian Nursing Sisters spans almost the entire history of Canada. As a young dominion, Canada was experiencing tremendous growth in commerce, manufacturing, logging, agriculture and mining. With settlers flocking to Canada to etch a new life for themselves and their families, a desperate need for nurses, doctors and hospitals rapidly developed throughout well-populated cities, rural communities, and Canada’s untamed Northern frontier. While on a “goodwill” tour of Canada in 1896, Lord Aberdeen (Canada’s GovernorGeneral) and Lady Aberdeen expressed particular interest in the lives of less privileged Canadians. It was during their visit to Vancouver, that Lady Aberdeen heard vivid accounts of the hardship and illness affecting women and children living in isolated areas. With resolve and fiery determination, Lady Aberdeen embarked on a campaign to enlist the support of many notable Canadians to join her to “advance the cause” — to bring District Nursing (later know as the Victorian Order of Nurses) to Canada. Queen Victoria granted the Victorian Order of Nurses its royal charter in December, 1897. Under the direction of Lady Aberdeen, (founder of the Victorian Order of Nurses), VON sites were quickly organized all across Canada. With the formation of the Canadian Army Medical Department in June 1899, the Canadian Army Nursing Service was created, thus beginning a tradition of duty, service and compassion forward on all fronts. In the Great War of 1914-18, Canada was automatically compelled to fight alongside Britain. In many ways, the First World War was a time of great change and innovation in the field of military medical services.

Along with the usual battlefield-inflicted injuries, the ravages of disease compounded the horrors of war. Being in such close proximity to the front, the advance medical aid stations were often under attack from shell fire, frequently placing the lives of Nursing Sisters in imminent danger. Nursing Sisters were also often plagued with the same aggravations of front line life. Rats and fleas were constant and vivid reminders of horrors and dangers particular to the front. The devotion to humanity and a dedication to a vocational “calling” to duty of care earned Nursing Sisters a very high reputation among the troops. Due to their blue dresses and white veils, Nursing Sisters were nicknamed the “bluebirds,” and for their courage and compassion, they received the admiration of many soldiers who saw battle at Ypres, Vimy Ridge, Somme and Passchendaele. Research from the VON’s archives, (VonErieStClair.ca/windsor-essex), confirms that on the home front, “the first VON office in Windsor was established as the “Border Cities Branch” at 537 Janette Avenue in 1927. It was staffed by two nurses from Ottawa and Mrs. J. Priestly Austin (of Walkerville) was chiefly responsible for [its] establishment.” After Germany’s invasion of Poland in September 1939, Canada again found itself thrust into a world conflict. Once again, Nursing Sisters answered the call of duty — administrating care, comfort and compassion to service personnel from the Army, Navy and Air Force. The end of the WWII brought the closure of military and station hospitals and the medical units gradually disbanded. Some of the Nursing Sisters as well as other personnel stayed on with the Army of Occupation to care for prisoners of war — to prepare battle-

Shown is a stamp commemorating the 100th anniversary of VON, courtesy of a private stamp collector (contributor’s name withheld by request). Lady Aberdeen’s photo appears in the bottom right-hand corner of the stamp.

scarred service personnel for their journeys home. For Nursing Sisters also returning to Canada, many choose to join the permanent forces to care for servicemen in need of continued care in Veterans’ hospitals and in their homes. According to Andrew Ward, Windsor’s VON Executive Director, “VON serves communities through its core values — respect, participation, responsiveness and courage. Additionally, VON is guided by the principles of primary health care; works in partnership with Canadians for a healthier society through leadership in community-based care delivery of innovative comprehensive health and social services and; influences in the delivery of health social policy.” The current Windsor location is, 400-4520 Rhodes Drive. Since 1897, Nursing Sisters have played front line “duty of care” roles in providing humanitarian relief here at home and overseas. Through the expansion of nursing care and social development, and changing ideals of administrating medical care through two world wars, a great depression, natural disasters and deadly epidemics, Nursing Sisters are recognized for stepping forward to honour and deliver a tradition of nursing care with a steadfast dedication to . . . bringing it home.