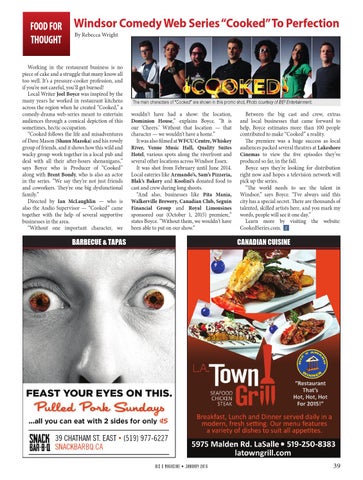 Working in the restaurant business is no piece of cake and a struggle that many know all too well. It’s a pressure-cooker profession, and if you’re not careful, you’ll get burned! Local Writer Joel Boyce was inspired by the many years he worked in restaurant kitchens across the region when he created “Cooked,” a comedy-drama web-series meant to entertain audiences through a comical depiction of this sometimes, hectic occupation. “Cooked follows the life and misadventures of Dave Mason (Shaun Mazoka) and his rowdy group of friends, and it shows how this wild and wacky group work together in a local pub and deal with all their after-hours shenanigans,” says Boyce who is Producer of “Cooked” along with Brent Bondy, who is also an actor in the series. “We say they’re not just friends and coworkers. They’re one big dysfunctional family.” Directed by Ian McLaughlin — who is also the Audio Supervisor — “Cooked” came together with the help of several supportive businesses in the area. “Without one important character, we

The main characters of “Cooked” are shown in this promo shot. Photo courtesy of BE² Entertainment.

wouldn’t have had a show: the location, Dominion House,” explains Boyce. “It is our ‘Cheers.’ Without that location — that character — we wouldn’t have a home.” It was also filmed at WFCU Centre, Whiskey River, Venue Music Hall, Quality Suites Hotel, various spots along the riverfront and several other locations across Windsor Essex. It was shot from February until June 2014. Local eateries like Armando’s, Sam’s Pizzeria, Blak’s Bakery and Koolini’s donated food to cast and crew during long shoots. “And also, businesses like Pita Mania, Walkerville Brewery, Canadian Club, Seguin Financial Group and Royal Limousines sponsored our (October 1, 2015) premiere,” states Boyce. “Without them, we wouldn’t have been able to put on our show.”

Between the big cast and crew, extras and local businesses that came forward to help, Boyce estimates more than 100 people contributed to make “Cooked” a reality. The premiere was a huge success as local audiences packed several theatres at Lakeshore Cinemas to view the five episodes they’ve produced so far, in the fall. Boyce says they’re looking for distribution right now and hopes a television network will pick up the series. “The world needs to see the talent in Windsor,” says Boyce. “I’ve always said this city has a special secret. There are thousands of talented, skilled artists here, and you mark my words, people will see it one day.” Learn more by visiting the website: CookedSeries.com.