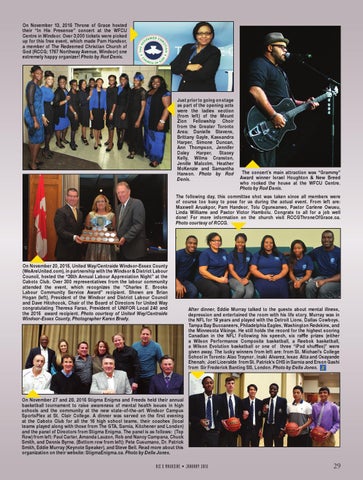 On November 13, 2015 Throne of Grace hosted their “In His Presence” concert at the WFCU Centre in Windsor. Over 3,000 tickets were picked up for this free event, which made Pam Handsor, a member of The Redeemed Christian Church of God (RCCG; 1767 Northway Avenue, Windsor) one extremely happy organizer! Photo by Rod Denis.

The following day, this committee shot was taken since all members were of course too busy to pose for us during the actual event. From left are: Maxwell Aruakpor, Pam Handsor, Tolu Ogunsanwo, Pastor Carlene Owusu, Linda Williams and Pastor Victor Hambolu. Congrats to all for a job well done! For more information on the church visit RCCGThroneOfGrace.ca. Photo courtesy of RCCG.

After dinner, Eddie Murray talked to the guests about mental illness, depression and entertained the room with his life story. Murray was in the NFL for 19 years and played with the Detroit Lions, Dallas Cowboys, Tampa Bay Buccaneers, Philadelphia Eagles, Washington Redskins, and the Minnesota Vikings. He still holds the record for the highest scoring Canadian in the NFL! Following his speech, six raffle prizes (either a Wilson Performance Composite basketball, a Reebok basketball, a Wilson Evolution basketball  or one of   three “iPod shuffles)” were given away. The lucky winners from left are: from St. Michael’s College School in Toronto: Alac Traynor , Inaki  Alvarez, Issac  Atta and Osayande Ehenah; Joel Liceralde  from St. Patrick’s CHS in Sarnia and Erson Gashi from  Sir Frederick Banting SS, London. Photo by Della Jones.

On November 27 and 28, 2015 Stigma Enigma and Freeds held their annual basketball tournament to raise awareness of mental health issues in high schools and the community at the new state-of-the-art Windsor Campus SportsPlex at St. Clair College. A dinner was served on the first evening at the Caboto Club for all the 16 high school teams, their coaches (local teams played along with those from The GTA, Sarnia, Kitchener and London) and the panel of Directors from Stigma Enigma. The panel is as follows: (Top Row) from left: Paul Carter, Amanda Lauzon, Rob and Nancy Campana, Chuck Smith, and Dennis Byrne. (Bottom row from left): Pete Cusumano, Dr. Patrick Smith, Eddie Murray (Keynote Speaker), and Steve Bell. Read more about this organization on their website: StigmaEnigma.ca. Photo by Della Jones. B IZ X M A G A Z IN E • J A N U A R Y 2 0 1 6