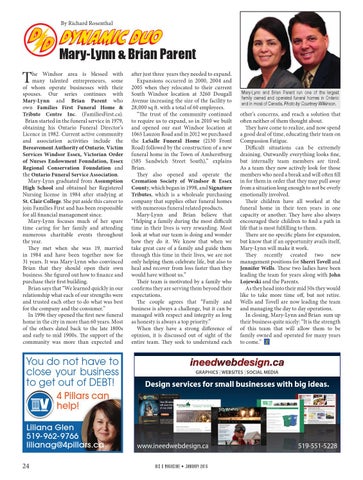 he Windsor area is blessed with many talented entrepreneurs, some of whom operate businesses with their spouses. Our series continues with Mary-Lynn and Brian Parent who own Families First Funeral Home & Tribute Centre Inc. (FamiliesFirst.ca). Brian started in the funeral service in 1979, obtaining his Ontario Funeral Director’s Licence in 1982. Current active community and association activities include the Bereavement Authority of Ontario, Victim Services Windsor Essex, Victorian Order of Nurses Endowment Foundation, Essex Regional Conservation Foundation and the Ontario Funeral Service Association. Mary-Lynn graduated from Assumption High School and obtained her Registered Nursing license in 1984 after studying at St. Clair College. She put aside this career to join Families First and has been responsible for all financial management since. Mary-Lynn focuses much of her spare time caring for her family and attending numerous charitable events throughout the year. They met when she was 19, married in 1984 and have been together now for 31 years. It was Mary-Lynn who convinced Brian that they should open their own business. She figured out how to finance and purchase their first building. Brian says that “We learned quickly in our relationship what each of our strengths were and trusted each other to do what was best for the company and the consumer.” In 1996 they opened the first new funeral home in the city in more than 60 years. Most of the others dated back to the late 1800s and early to mid 1900s. The support of the community was more than expected and

You do not have to close your business to get out of debt!

after just three years they needed to expand. Expansions occurred in 2000, 2004 and 2005 when they relocated to their current South Windsor location at 3260 Dougall Avenue increasing the size of the facility to 28,000 sq ft. with a total of 60 employees. “The trust of the community continued to require us to expand, so in 2010 we built and opened our east Windsor location at 1065 Lauzon Road and in 2012 we purchased the LaSalle Funeral Home (2130 Front Road) followed by the construction of a new funeral home in the Town of Amherstburg (585 Sandwich Street South),” explains Brian. They also opened and operate the Cremation Society of Windsor & Essex County, which began in 1998, and Signature Tributes, which is a wholesale purchasing company that supplies other funeral homes with numerous funeral related products. Mary-Lynn and Brian believe that “Helping a family during the most difficult time in their lives is very rewarding. Most look at what our team is doing and wonder how they do it. We know that when we take great care of a family and guide them through this time in their lives, we are not only helping them celebrate life, but also to heal and recover from loss faster than they would have without us.” Their team is motivated by a family who confirms they are serving them beyond their expectations. The couple agrees that “Family and business is always a challenge, but it can be managed with respect and integrity as long as honesty is always a top priority.” When they have a strong difference of opinion, it is discussed out of sight of the entire team. They seek to understand each

Mary-Lynn and Brian Parent run one of the largest family owned and operated funeral homes in Ontario and in most of Canada. Photo by Courtney Wilkinson.

other’s concerns, and reach a solution that often neither of them thought about. They have come to realize, and now spend a good deal of time, educating their team on Compassion Fatigue. Difficult situations can be extremely draining. Outwardly everything looks fine, but internally team members are tired. As a team they now actively look for those members who need a break and will often fill in for them in order that they may pull away from a situation long enough to not be overly emotionally involved. Their children have all worked at the funeral home in their teen years in one capacity or another. They have also always encouraged their children to find a path in life that is most fulfilling to them. There are no specific plans for expansion, but know that if an opportunity avails itself, Mary-Lynn will make it work. They recently created two new management positions for Sherri Tovell and Jennifer Wells. These two ladies have been leading the team for years along with John Lojewski and the Parents. As they head into their mid 50s they would like to take more time off, but not retire. Wells and Tovell are now leading the team and managing the day to day operations. In closing, Mary-Lynn and Brian sum up their business quite nicely: “It is the strength of this team that will allow them to be family owned and operated for many years to come.”