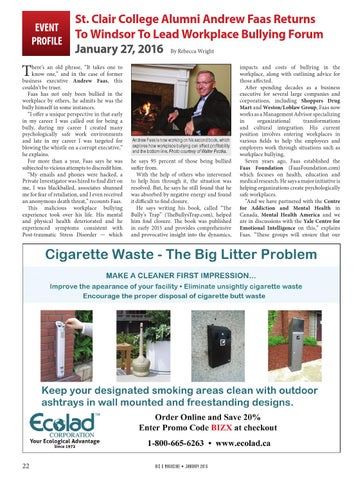 here’s an old phrase, “It takes one to know one,” and in the case of former business executive Andrew Faas, this couldn’t be truer. Faas has not only been bullied in the workplace by others, he admits he was the bully himself in some instances. “I offer a unique perspective in that early in my career I was called out for being a bully, during my career I created many psychologically safe work environments and late in my career I was targeted for blowing the whistle on a corrupt executive,” he explains. For more than a year, Faas says he was subjected to vicious attempts to discredit him. “My emails and phones were hacked, a Private Investigator was hired to find dirt on me, I was blackballed, associates shunned me for fear of retaliation, and I even received an anonymous death threat,” recounts Faas. This malicious workplace bullying experience took over his life. His mental and physical health deteriorated and he experienced symptoms consistent with Post-traumatic Stress Disorder — which

Andrew Faas is now working on his second book, which explores how workplace bullying can affect profitability and the bottom line. Photo courtesy of Walter Psotka.

he says 95 percent of those being bullied suffer from. With the help of others who intervened to help him through it, the situation was resolved. But, he says he still found that he was absorbed by negative energy and found it difficult to find closure. He says writing his book, called “The Bully’s Trap” (TheBullysTrap.com), helped him find closure. The book was published in early 2015 and provides comprehensive and provocative insight into the dynamics,

impacts and costs of bullying in the workplace, along with outlining advice for those affected. After spending decades as a business executive for several large companies and corporations, including Shoppers Drug Mart and Weston/Loblaw Group, Faas now works as a Management Advisor specializing in organizational transformations and cultural integration. His current position involves entering workplaces in various fields to help the employees and employers work through situations such as workplace bullying. Seven years ago, Faas established the Faas Foundation (FaasFoundation.com) which focuses on health, education and medical research. He says a major initiative is helping organizations create psychologically safe workplaces. “And we have partnered with the Centre for Addiction and Mental Health in Canada, Mental Health America and we are in discussions with the Yale Centre for Emotional Intelligence on this,” explains Faas. “These groups will ensure that our