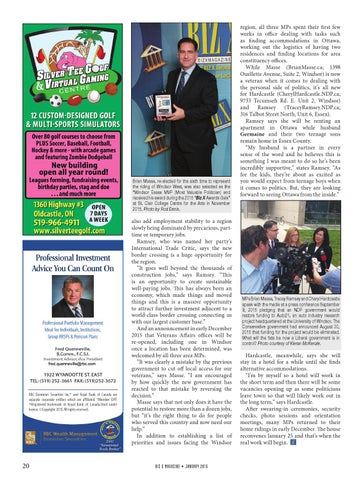 Brian Masse, re-elected for the sixth time to represent the riding of Windsor West, was also selected as the “Windsor Essex MVP (Most Valuable Politician) and received his award during the 2015 “Biz X Awards Gala” at St. Clair College Centre for the Arts in November 2015. Photo by Rod Denis.

also add employment stability to a region slowly being dominated by precarious, parttime or temporary jobs. Ramsey, who was named her party’s International Trade Critic, says the new border crossing is a huge opportunity for the region. “It goes well beyond the thousands of construction jobs,” says Ramsey. “This is an opportunity to create sustainable well-paying jobs. This has always been an economy, which made things and moved things and this is a massive opportunity to attract further investment adjacent to a world-class border crossing connecting us with our largest customer base.” And an announcement in early December 2015 that Veterans Affairs offices will be re-opened, including one in Windsor once a location has been determined, was welcomed by all three area MPs. “It was clearly a mistake by the previous government to cut off local access for our veterans,” says Masse. “I am encouraged by how quickly the new government has reacted to that mistake by reversing the decision.” Masse says that not only does it have the potential to restore more than a dozen jobs, but “it’s the right thing to do for people who served this country and now need our help.” In addition to establishing a list of priorities and issues facing the Windsor

region, all three MPs spent their first few weeks in office dealing with tasks such as finding accommodations in Ottawa, working out the logistics of having two residences and finding locations for area constituency offices. While Masse (BrianMasse.ca; 1398 Ouellette Avenue, Suite 2, Windsor) is now a veteran when it comes to dealing with the personal side of politics, it’s all new for Hardcastle (CherylHardcastle.NDP.ca; 9733 Tecumseh Rd. E. Unit 2, Windsor) and Ramsey (TraceyRamsey.NDP.ca; 316 Talbot Street North, Unit 6, Essex). Ramsey says she will be renting an apartment in Ottawa while husband Germaine and their two teenage sons remain home in Essex County. “My husband is a partner in every sense of the word and he believes this is something I was meant to do so he’s been incredibly supportive,” states Ramsey. “As for the kids, they’re about as excited as you would expect from teenage boys when it comes to politics. But, they are looking forward to seeing Ottawa from the inside.”

MPs Brian Masse, Tracey Ramsey and Cheryl Hardcastle speak with the media at a press conference September 9, 2015 pledging that an NDP government would restore funding to Auto21, an auto industry research project headquartered at the University of Windsor. The Conservative government had announced August 30, 2015 that funding for the project would be eliminated. What will the fate be now a Liberal government is in control? Photo courtesy of Kieran McKenzie.

Hardcastle, meanwhile, says she will stay in a hotel for a while until she finds alternative accommodations. “I’m by myself so a hotel will work in the short term and then there will be some vacancies opening up as some politicians leave town so that will likely work out in the long term,” says Hardcastle. After swearing-in ceremonies, security checks, photo sessions and orientation meetings, many MPs returned to their home ridings in early December. The house reconvenes January 25 and that’s when the real work will begin.