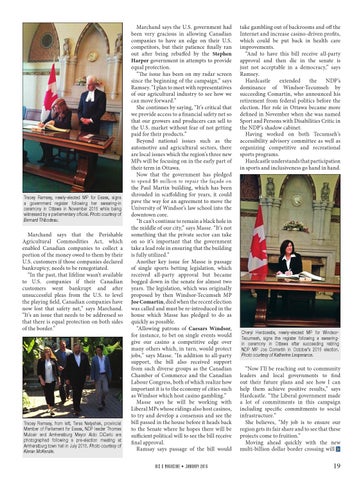 Tracey Ramsey, newly-elected MP for Essex, signs a government register following her swearing-in ceremony in Ottawa in November 2015 while being witnessed by a parliamentary official. Photo courtesy of Bernard Thibodeau.

Marchand says that the Perishable Agricultural Commodities Act, which enabled Canadian companies to collect a portion of the money owed to them by their U.S. customers if those companies declared bankruptcy, needs to be renegotiated. “In the past, that lifeline wasn’t available to U.S. companies if their Canadian customers went bankrupt and after unsuccessful pleas from the U.S. to level the playing field, Canadian companies have now lost that safety net,” says Marchand. “It’s an issue that needs to be addressed so that there is equal protection on both sides of the border.”

Marchand says the U.S. government had been very gracious in allowing Canadian companies to have an edge on their U.S. competitors, but their patience finally ran out after being rebuffed by the Stephen Harper government in attempts to provide equal protection. “The issue has been on my radar screen since the beginning of the campaign,” says Ramsey. “I plan to meet with representatives of our agricultural industry to see how we can move forward.” She continues by saying, “It’s critical that we provide access to a financial safety net so that our growers and producers can sell to the U.S. market without fear of not getting paid for their products.” Beyond national issues such as the automotive and agricultural sectors, there are local issues which the region’s three new MPs will be focusing on in the early part of their term in Ottawa. Now that the government has pledged to spend $6 million to repair the façade on the Paul Martin building, which has been shrouded in scaffolding for years, it could pave the way for an agreement to move the University of Windsor’s law school into the downtown core. “It can’t continue to remain a black hole in the middle of our city,” says Masse. “It’s not something that the private sector can take on so it’s important that the government take a lead role in ensuring that the building is fully utilized.” Another key issue for Masse is passage of single sports betting legislation, which received all-party approval but became bogged down in the senate for almost two years. The legislation, which was originally proposed by then Windsor-Tecumseh MP Joe Comartin, died when the recent election was called and must be re-introduced in the house which Masse has pledged to do as quickly as possible. “Allowing patrons of Caesars Windsor, for instance, to bet on single events would give our casino a competitive edge over many others which, in turn, would protect jobs,” says Masse. “In addition to all-party support, the bill also received support from such diverse groups as the Canadian Chamber of Commerce and the Canadian Labour Congress, both of which realize how important it is to the economy of cities such as Windsor which host casino gambling.” Masse says he will be working with Liberal MPs whose ridings also host casinos, to try and develop a consensus and see the bill passed in the house before it heads back to the Senate where he hopes there will be sufficient political will to see the bill receive final approval. Ramsay says passage of the bill would B IZ X M A G A Z IN E • J A N U A R Y 2 0 1 6

take gambling out of backrooms and off the Internet and increase casino-driven profits, which could be put back in health care improvements. “And to have this bill receive all-party approval and then die in the senate is just not acceptable in a democracy,” says Ramsey. Hardcastle extended the NDP’s dominance of Windsor-Tecumseh by succeeding Comartin, who announced his retirement from federal politics before the election. Her role in Ottawa became more defined in November when she was named Sport and Persons with Disabilities Critic in the NDP’s shadow cabinet. Having worked on both Tecumseh’s accessibility advisory committee as well as organizing competitive and recreational sports programs. Hardcastle understands that participation in sports and inclusiveness go hand in hand.

“Now I’ll be reaching out to community leaders and local governments to find out their future plans and see how I can help them achieve positive results,” says Hardcastle. “The Liberal government made a lot of commitments in this campaign including specific commitments to social infrastructure.” She believes, “My job is to ensure our region gets its fair share and to see that these projects come to fruition.” Moving ahead quickly with the new multi-billion dollar border crossing will