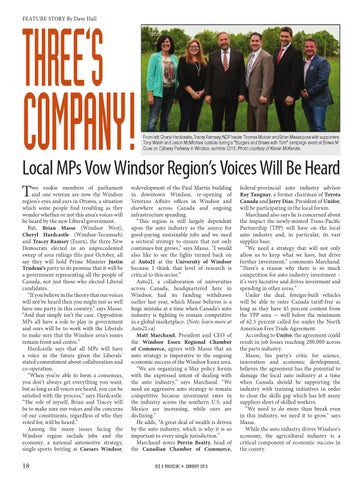 wo rookie members of parliament and one veteran are now the Windsor region’s eyes and ears in Ottawa, a situation which some people find troubling as they wonder whether or not this area’s voices will be heard by the new Liberal government. But, Brian Masse (Windsor West), Cheryl Hardcastle (Windsor-Tecumseh) and Tracey Ramsey (Essex), the three New Democrats elected in an unprecedented sweep of area ridings this past October, all say they will hold Prime Minister Justin Trudeau’s party to its promise that it will be a government representing all the people of Canada, not just those who elected Liberal candidates. “If you believe in the theory that our voices will not be heard then you might just as well have one party in this country,” says Masse. “And that simply isn’t the case. Opposition MPs all have a role to play in government and ours will be to work with the Liberals to make sure that the Windsor area’s issues remain front and centre.” Hardcastle says that all MPs will have a voice in the future given the Liberals’ stated commitment about collaboration and co-operation. “When you’re able to form a consensus, you don’t always get everything you want, but as long as all voices are heard, you can be satisfied with the process,” says Hardcastle. “The role of myself, Brian and Tracey will be to make sure our voices and the concerns of our constituents, regardless of who they voted for, will be heard.” Among the many issues facing the Windsor region include jobs and the economy, a national automotive strategy, single-sports betting at Caesars Windsor,

redevelopment of the Paul Martin building in downtown Windsor, re-opening of Veterans Affairs offices in Windsor and elsewhere across Canada and ongoing infrastructure spending. “This region is still largely dependent upon the auto industry as the source for good-paying sustainable jobs and we need a sectoral strategy to ensure that not only continues but grows,” says Masse. “I would also like to see the lights turned back on at Auto21 at the University of Windsor because I think that level of research is critical to this sector.” Auto21, a collaboration of universities across Canada, headquartered here in Windsor, had its funding withdrawn earlier last year, which Masse believes is a huge mistake at a time when Canada’s auto industry is fighting to remain competitive in a global marketplace. (Note: learn more at Auto21.ca) Matt Marchand, President and CEO of the Windsor Essex Regional Chamber of Commerce, agrees with Masse that an auto strategy is imperative to the ongoing economic success of the Windsor Essex area. “We are organizing a May policy forum with the expressed intent of dealing with the auto industry,” says Marchand. “We need an aggressive auto strategy to remain competitive because investment rates in the industry across the southern U.S. and Mexico are increasing, while ours are declining.” He adds, “A great deal of wealth is driven by the auto industry, which is why it is so important to every single jurisdiction.” Marchand notes Perrin Beatty, head of the Canadian Chamber of Commerce, B IZ X M A G A Z IN E • J A N U A R Y 2 0 1 6

federal-provincial auto industry advisor Ray Tanguay, a former chairman of Toyota Canada and Jerry Dias, President of Unifor, will be participating in the local forum. Marchand also says he is concerned about the impact the newly-minted Trans-Pacific Partnership (TPP) will have on the local auto industry and, in particular, its vast supplier base. “We need a strategy that will not only allow us to keep what we have, but drive further investment,” comments Marchand. “There’s a reason why there is so much competition for auto industry investment – it’s very lucrative and drives investment and spending in other areas.” Under the deal, foreign-built vehicles will be able to enter Canada tariff-free as long as they have 45 percent content from the TPP area — well below the minimum of 62.5 percent called for under the North American Free Trade Agreement. According to Unifor, the agreement could result in job losses reaching 200,000 across the parts industry. Masse, his party’s critic for science, innovation and economic development, believes the agreement has the potential to damage the local auto industry at a time when Canada should be supporting the industry with training initiatives in order to close the skills gap which has left many suppliers short of skilled workers. “We need to do more than break even in this industry, we need it to grow,” says Masse. While the auto industry drives Windsor’s economy, the agricultural industry is a critical component of economic success in the county.