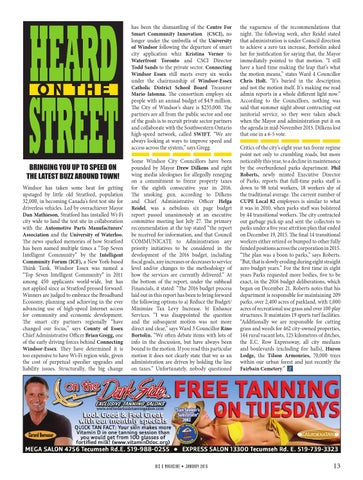 has been the dismantling of the Centre For Smart Community Innovation (CSCI), no longer under the umbrella of the University of Windsor following the departure of smart city application whiz Kristina Verner to Waterfront Toronto and CSCI Director Todd Sands to the private sector. Connecting Windsor Essex still meets every six weeks under the chairmanship of Windsor-Essex Catholic District School Board Treasurer Mario Iatonna. The consortium employs six people with an annual budget of $4.9 million. The City of Windsor’s share is $235,000. The partners are all from the public sector and one of the goals is to recruit private sector partners and collaborate with the Southwestern Ontario high-speed network, called SWIFT. “We are always looking at ways to improve speed and access across the system,” says Gregg.

BRINGING YOU UP TO SPEED ON THE LATEST BUZZ AROUND TOWN! Windsor has taken some heat for getting upstaged by little old Stratford, population 32,000, in becoming Canada’s first test site for driverless vehicles. Led by overachiever Mayor Dan Mathieson, Stratford has installed Wi-Fi city wide to land the test site in collaboration with the Automotive Parts Manufacturers’ Association and the University of Waterloo. The news sparked memories of how Stratford has been named multiple times a “Top Seven Intelligent Community” by the Intelligent Community Forum (ICF), a New York-based Think Tank. Windsor Essex was named a “Top Seven Intelligent Community” in 2011 among 450 applicants world-wide, but has not applied since as Stratford pressed forward. Winners are judged to embrace the Broadband Economy, planning and achieving in the ever advancing use of high-speed Internet access for community and economic development. The smart city partners regionally “have changed our focus,” says County of Essex Chief Administrative Officer Brian Gregg, one of the early driving forces behind Connecting Windsor-Essex. They have determined it is too expensive to have Wi-Fi region wide, given the cost of perpetual speedier upgrades and liability issues. Structurally, the big change

Some Windsor City Councillors have been pounded by Mayor Drew Dilkens and right wing media ideologues for allegedly reneging on a commitment to freeze property taxes for the eighth consecutive year in 2016. The smoking gun, according to Dilkens and Chief Administrative Officer Helga Reidel, was a nebulous six page budget report passed unanimously at an executive committee meeting last July 27. The primary recommendation at the top stated “the report be received for information, and that Council COMMUNICATE to Administration any priority initiatives to be considered in the development of the 2016 budget, including fiscal goals, any increases or decreases to service level and/or changes to the methodology of how the services are currently delivered.” At the bottom of the report, under the subhead Financials, it stated: “The 2016 budget process laid out in this report has been to bring forward the following options to a) Reduce the Budget/ Minimize Tax Levy Increase. b) Enhance Services. “I was disappointed the question and the subsequent motion was not more direct and clear,” says Ward 3 Councillor Rino Bortolin. “We often debate items with lots of info in the discussion, but have always been bound to the motion. If you read this particular motion it does not clearly state that we as an administration are driven by holding the line on taxes.” Unfortunately, nobody questioned

the vagueness of the recommendations that night. The following week, after Reidel stated that administration is under Council direction to achieve a zero tax increase, Bortolin asked her for justification for saying that, the Mayor immediately pointed to that motion. “I still have a hard time making the leap that’s what the motion means,” states Ward 4 Councillor Chris Holt. “It’s buried in the description and not the motion itself. It’s making me read admin reports in a whole different light now.” According to the Councillors, nothing was said that summer night about contracting out janitorial service, so they were taken aback when the Mayor and administration put it on the agenda in mid-November 2015. Dilkens lost that one in a 6-5 vote. Critics of the city’s eight year tax freeze regime point not only to crumbling roads, but more noticeably this year, to a decline in maintenance by the overburdened parks department. Phil Roberts, newly minted Executive Director of Parks, reports that full-time parks staff is down to 98 total workers, 18 workers shy of the traditional average. The current number of CUPE Local 82 employees is similar to what it was in 2010, when parks staff was bolstered by 44 transitional workers. The city contracted out garbage pick-up and sent the collectors to parks under a five year attrition plan that ended on December 19, 2015. The final 14 transitional workers either retired or bumped to other fully funded positions across the corporation in 2015. “The plan was a boon to parks,” says Roberts. “But, that is slowly eroding during eight straight zero budget years.” For the first time in eight years Parks requested more bodies, five to be exact, in the 2016 budget deliberations, which began on December 21. Roberts notes that his department is responsible for maintaining 209 parks, over 2,400 acres of parkland, with 1,000 acres of recreational use grass and over 100 play structures. It maintains 19 sports turf facilities. “Additionally we are responsible for cutting grass and weeds for 462 city-owned properties, 144 rural vacant lots, 125 kilometres of ditches, the E.C. Row Expressway, all city medians and boulevards (excluding fire halls), Huron Lodge, the Tilson Armouries, 70,000 trees within our urban forest and just recently the Fairbain Cemetery.”