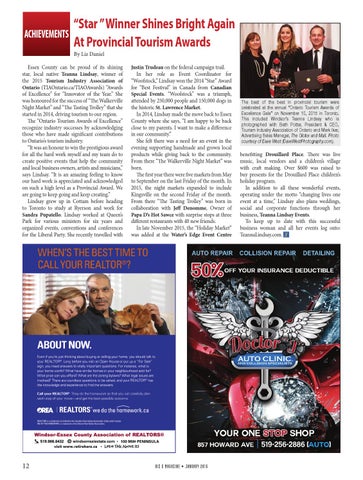 Essex County can be proud of its shining star, local native Teanna Lindsay, winner of the 2015 Tourism Industry Association of Ontario (TIAOntario.ca/TIAOAwards) “Awards of Excellence” for “Innovator of the Year.” She was honoured for the success of “The Walkerville Night Market” and “The Tasting Trolley” that she started in 2014, driving tourism to our region. The “Ontario Tourism Awards of Excellence” recognize industry successes by acknowledging those who have made significant contributions to Ontario’s tourism industry. “It was an honour to win the prestigious award for all the hard work myself and my team do to create positive events that help the community and local business owners, artists and musicians,” says Lindsay. “It is an amazing feeling to know our hard work is appreciated and acknowledged on such a high level as a Provincial Award. We are going to keep going and keep creating.” Lindsay grew up in Cottam before heading to Toronto to study at Ryerson and work for Sandra Pupatello. Lindsay worked at Queen’s Park for various ministers for six years and organized events, conventions and conferences for the Liberal Party. She recently travelled with

Justin Trudeau on the federal campaign trail. In her role as Event Coordinator for “Woofstock,” Lindsay won the 2014 “Star” Award for “Best Festival” in Canada from Canadian Special Events. “Woofstock” was a triumph, attended by 250,000 people and 150,000 dogs in the historic St. Lawrence Market. In 2014, Lindsay made the move back to Essex County where she says, “I am happy to be back close to my parents. I want to make a difference in our community.” She felt there was a need for an event in the evening supporting handmade and grown local products while giving back to the community. From there “The Walkerville Night Market” was born. The first year there were five markets from May to September on the last Friday of the month. In 2015, the night markets expanded to include Kingsville on the second Friday of the month. From there “The Tasting Trolley” was born in collaboration with Jeff Denomme, Owner of Papa D’s Hot Sawce with surprise stops at three different restaurants with 40 new friends. In late November 2015, the “Holiday Market” was added at the Water’s Edge Event Centre

The best of the best in provincial tourism were celebrated at the annual “Ontario Tourism Awards of Excellence Gala” on November 10, 2015 in Toronto. This included Windsor’s Teanna Lindsay who is photographed with Beth Potter, President & CEO, Tourism Industry Association of Ontario and Mark Iker, Advertising Sales Manager, The Globe and Mail. Photo courtesy of Dave West (DaveWestPhotography.com).

benefitting Drouillard Place. There was live music, local vendors and a children’s village with craft making. Over $600 was raised to buy presents for the Drouillard Place children’s holiday program. In addition to all these wonderful events, operating under the motto “changing lives one event at a time,” Lindsay also plans weddings, social and corporate functions through her business, Teanna Lindsay Events. To keep up to date with this successful business woman and all her events log onto: TeannaLindsay.com.