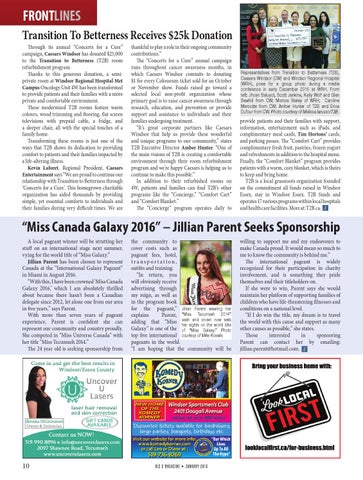 Through its annual “Concerts for a Cure” campaign, Caesars Windsor has donated $25,000 to the Transition to Betterness (T2B) room refurbishment program. Thanks to this generous donation, a semiprivate room at Windsor Regional Hospital Met Campus Oncology Unit 4W has been transformed to provide patients and their families with a more private and comfortable environment. These modernized T2B rooms feature warm colours, wood trimming and flooring, flat screen televisions with prepaid cable, a fridge, and a sleeper chair, all with the special touches of a family home. Transforming these rooms is just one of the ways that T2B shows its dedication to providing comfort to patients and their families impacted by a life-altering illness. Kevin Laforet, Regional President, Caesars Entertainment says “We are proud to continue our relationship with Transition to Betterness through ‘Concerts for a Cure’. This homegrown charitable organization has aided thousands by providing simple, yet essential comforts to individuals and their families during very difficult times. We are

thankful to play a role in their ongoing community contributions.” The “Concerts for a Cure” annual campaign runs throughout cancer awareness months, in which Caesars Windsor commits to donating $1 for every Colosseum ticket sold for an October or November show. Funds raised go toward a selected local non-profit organization whose primary goal is to raise cancer awareness through research, education, and prevention or provide support and assistance to individuals and their families undergoing treatment. “It’s great corporate partners like Caesars Windsor that help us provide these wonderful and unique programs to our community,” states T2B Executive Director Amber Hunter. “One of the main visions of T2B is creating a comfortable environment through their room refurbishment program and we’re happy Caesars is helping us to continue to make this possible.” In addition to their refurbished rooms on 4W, patients and families can find T2B’s other programs like the “Concierge,” “Comfort Cart” and “Comfort Blanket.” The “Concierge” program operates daily to

provide patients and their families with support, information, entertainment such as iPads, and complimentary meal cards, Tim Hortons’ cards, and parking passes. The “Comfort Cart” provides complimentary fresh fruit, pastries, frozen yogurt and refreshments in addition to the hospital menu. Finally, the “Comfort Blanket” program provides patients with a warm, cozy blanket, which is theirs to keep and bring home. T2B is a local grassroots organization founded on the commitment all funds raised in Windsor Essex, stay in Windsor Essex. T2B funds and operates 17 various programs within local hospitals and health care facilities. More at: T2B.ca.

“Miss Canada Galaxy 2016” – Jillian Parent Seeks Sponsorship A local pageant winner will be strutting her stuff on an international stage next summer, vying for the world title of “Miss Galaxy.” Jillian Parent has been chosen to represent Canada at the “International Galaxy Pageant” in Miami in August 2016. “With this, I have been crowned ‘Miss Canada Galaxy 2016,’ which I am absolutely thrilled about because there hasn’t been a Canadian delegate since 2012, let alone one from our area in five years,” says Parent. With more than seven years of pageant experience, Parent is confident she can represent our community and country proudly. She competed in “Miss Universe Canada” with her title “Miss Tecumseh 2014.” The 24 year old is seeking sponsorship from

the community to cover costs such as pageant fees, hotel, transportation, outfits and training. “In return, you will obviously receive advertising through my reign, as well as in the program book for the pageant,” Jillian Parent wearing her explains Parent, “Miss Tecumseh 2014” adding that “Miss sash and crown now sets her sights on the world title Galaxy” is one of the of “Miss Galaxy.” Photo top five international courtesy of Mike Kovaliv. pageants in the world. “I am hoping that the community will be

willing to support me and my endeavours to make Canada proud. It would mean so much to me to know the community is behind me.” The international pageant is widely recognized for their participation in charity involvement, and is something they pride themselves and their titleholders on. If she were to win, Parent says she would maintain her platform of supporting families of children who have life-threatening illnesses and conditions on a national level. “If I do win the title, my dream is to travel the world with this cause and support as many other causes as possible,” she states. Those interested in sponsoring Parent can contact her by emailing: jillian.parent@hotmail.com.