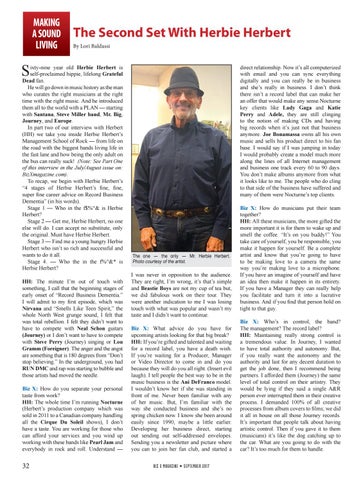 The Second Set With Herbie Herbert By Lori Baldassi

ixty-nine year old Herbie Herbert is self-proclaimed hippie, lifelong Grateful Dead fan. He will go down in music history as the man who curates the right musicians at the right time with the right music. And he introduced them all to the world with a PLAN — starting with Santana, Steve Miller band, Mr. Big, Journey, and Europe. In part two of our interview with Herbert (HH) we take you inside Herbie Herbert’s Management School of Rock — from life on the road with the biggest bands living life in the fast lane and how being the only adult on the bus can really suck! (Note: See Part One of this interview in the July/August issue on: BizXmagazine.com). To recap, we begin with Herbie Herbert’s “4 stages of Herbie Herbert’s fine, fine, super fine career advice on Record Business Dementia” (in his words). Stage 1 — Who in the f$%^& is Herbie Herbert? Stage 2 — Get me, Herbie Herbert, no one else will do. I can accept no substitute, only the original. Must have Herbie Herbert. Stage 3 — Find me a young hungry Herbie Herbert who isn’t so rich and successful and wants to do it all. Stage 4. — Who the in the f%^&* is Herbie Herbert? HH: The minute I’m out of touch with something, I call that the beginning stages of early onset of “Record Business Dementia.” I will admit to my first episode, which was Nirvana and “Smells Like Teen Spirit,” the whole North West grunge sound, I felt that was total rebellion. I felt they didn’t want to have to compete with Neal Schon guitars (Journey) or I don’t want to have to compete with Steve Perry (Journey) singing or Lou Gramm (Foreigner). The anger and the angst are something that is 180 degrees from “Don’t stop believing.” In the underground, you had RUN DMC and rap was starting to bubble and those artists had moved the needle. Biz X: How do you separate your personal taste from work? HH: The whole time I’m running Nocturne (Herbert’s production company which was sold in 2011 to a Canadian company handling all the Cirque Du Soleil shows), I don’t have a taste. You are working for those who can afford your services and you wind up working with these bands like Pearl Jam and everybody in rock and roll. Understand —

direct relationship. Now it’s all computerized with email and you can sync everything digitally and you can really be in business and she’s really in business. I don’t think there isn’t a record label that can make her an offer that would make any sense.Nocturne key clients like Lady Gaga and Katie Perry and Adele, they are still clinging to the notion of making CDs and having big records when it’s just not that business anymore. Joe Bonamassa owns all his own music and sells his product direct to his fan base. I would say if I was jumping in today I would probably create a model much more along the lines of all Internet management and business one track every 60 to 90 days. You don’t make albums anymore from what it looks like to me. The people who do cling to that side of the business have suffered and many of them were Nocturne’s top clients.

The one — the only — Mr. Herbie Herbert. Photo courtesy of the artist.

I was never in opposition to the audience. They are right, I’m wrong, it’s that’s simple and Beastie Boys are not my cup of tea but, we did fabulous work on their tour. They were another indication to me I was losing touch with what was popular and wasn’t my taste and I didn’t want to continue. Biz X: What advice do you have for upcoming artists looking for that big break? HH: If you’re gifted and talented and waiting for a record label, you have a death wish. If you’re waiting for a Producer, Manager or Video Director to come in and do you because they will do you all right. (Insert evil laugh). I tell people the best way to be in the music business is the Ani DeFranco model. I wouldn’t know her if she was standing in front of me. Never been familiar with any of her music. But, I’m familiar with the way she conducted business and she’s no spring chicken now. I know she been around easily since 1990, maybe a little earlier. Developing her business direct, starting out sending out self-addressed envelopes. Sending you a newsletter and picture where you can to join her fan club, and started a B IZ X M A G A Z IN E • S E P T E M B E R 2 0 1 7

Biz X: How do musicians put their team together? HH: All these musicians, the more gifted the more important it is for them to wake up and smell the coffee. “It’s on you buddy!” You take care of yourself, you be responsible, you make it happen for yourself. Be a complete artist and know that you’re going to have to be making love to a camera the same way you’re making love to a microphone. If you have an imagine of yourself and have an idea then make it happen in its entirety. If you have a Manager they can really help you facilitate and turn it into a lucrative business. And if you find that person hold on tight to that guy. Biz X: Who’s in control, the band? The management? The record label? HH: Maintaining really strong control is a tremendous value. In Journey, I wanted to have total authority and autonomy. But, if you really want the autonomy and the authority and last for any decent duration to get the job done, then I recommend being partners. I afforded them (Journey) the same level of total control on their artistry. They would be lying if they said a single A&R person ever interrupted them in their creative process. I demanded 100% of all creative processes from album covers to films; we did it all in house on all those Journey records. It’s important that people talk about having artistic control. Then if you gave it to them (musicians) it’s like the dog catching up to the car. What are you going to do with the car? It’s too much for them to handle.

ON THE COVER: Proposed changes to provincial labour law legislation, including a hike in the minimum wage, could cost the Ontario economy as...

ON THE COVER: Proposed changes to provincial labour law legislation, including a hike in the minimum wage, could cost the Ontario economy as...