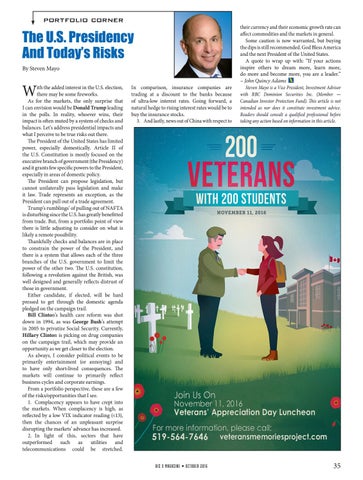 The U.S. Presidency And Today’s Risks By Steven Mayo

ith the added interest in the U.S. election, there may be some fireworks. As for the markets, the only surprise that I can envision would be Donald Trump leading in the polls. In reality, whoever wins, their impact is often muted by a system of checks and balances. Let’s address presidential impacts and what I perceive to be true risks out there. The President of the United States has limited power, especially domestically. Article II of the U.S. Constitution is mostly focused on the executive branch of government (the Presidency) and it grants few specific powers to the President, especially in areas of domestic policy. The President can propose legislation, but cannot unilaterally pass legislation and make it law. Trade represents an exception, as the President can pull out of a trade agreement. Trump’s rumblings’ of pulling out of NAFTA is disturbing since the U.S. has greatly benefitted from trade. But, from a portfolio point of view there is little adjusting to consider on what is likely a remote possibility. Thankfully checks and balances are in place to constrain the power of the President, and there is a system that allows each of the three branches of the U.S. government to limit the power of the other two. The U.S. constitution, following a revolution against the British, was well designed and generally reflects distrust of those in government. Either candidate, if elected, will be hard pressed to get through the domestic agenda pledged on the campaign trail. Bill Clinton’s health care reform was shot down in 1994, as was George Bush’s attempt in 2005 to privatize Social Security. Currently, Hillary Clinton is picking on drug companies on the campaign trail, which may provide an opportunity as we get closer to the election. As always, I consider political events to be primarily entertainment (or annoying) and to have only short-lived consequences. The markets will continue to primarily reflect business cycles and corporate earnings. From a portfolio perspective, these are a few of the risks/opportunities that I see. 1. Complacency appears to have crept into the markets. When complacency is high, as reflected by a low VIX indicator reading (<13), then the chances of an unpleasant surprise disrupting the markets’ advance has increased. 2. In light of this, sectors that have outperformed such as utilities and telecommunications could be stretched.

In comparison, insurance companies are trading at a discount to the banks because of ultra-low interest rates. Going forward, a natural hedge to rising interest rates would be to buy the insurance stocks. 3. And lastly, news out of China with respect to

their currency and their economic growth rate can affect commodities and the markets in general. Some caution is now warranted, but buying the dips is still recommended. God Bless America and the next President of the United States. A quote to wrap up with: “If your actions inspire others to dream more, learn more, do more and become more, you are a leader.” ~ John Quincy Adams

Steven Mayo is a Vice President, Investment Advisor with RBC Dominion Securities Inc. (Member — Canadian Investor Protection Fund). This article is not intended as nor does it constitute investment advice. Readers should consult a qualified professional before taking any action based on information in this article.