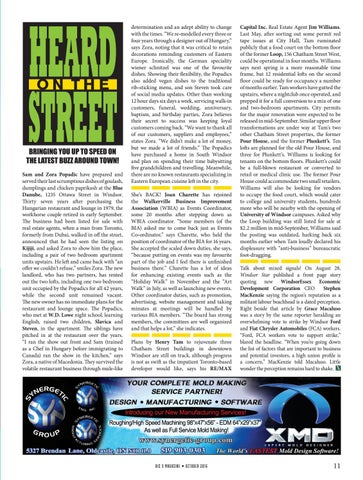 BRINGING YOU UP TO SPEED ON THE LATEST BUZZ AROUND TOWN! Sam and Zora Popadic have prepared and served their last scrumptious dishes of goulash, dumplings and chicken paprikash at the Blue Danube, 1235 Ottawa Street in Windsor. Thirty seven years after purchasing the Hungarian restaurant and lounge in 1979, the workhorse couple retired in early September. The business had been listed for sale with real estate agents, when a man from Toronto, formerly from Dubai, walked in off the street, announced that he had seen the listing on Kijiji, and asked Zora to show him the place, including a pair of two bedroom apartment units upstairs. He left and came back with “an offer we couldn’t refuse,” smiles Zora. The new landlord, who has two partners, has rented out the two lofts, including one two bedroom unit occupied by the Popadics for all 42 years, while the second unit remained vacant. The new owner has no immediate plans for the restaurant and lounge space. The Popadics, who met at W.D. Lowe night school, learning English, raised two children, Slavica and Steven, in the apartment. The siblings have pitched in at the restaurant over the years. “I ran the show out front and Sam (trained as a Chef in Hungary before immigrating to Canada) ran the show in the kitchen,” says Zora, a native of Macedonia. They survived the volatile restaurant business through mule-like

determination and an adept ability to change with the times. “We re-modelled every three or four years through a designer out of Hungary,” says Zora, noting that it was critical to retain decorations reminding customers of Eastern Europe. Ironically, the German speciality wiener schnitzel was one of the favourite dishes. Showing their flexibility, the Popadics also added vegan dishes to the traditional rib-sticking menu, and son Steven took care of social media updates. Other than working 12 hour days six days a week, servicing walk-in customers, funeral, wedding, anniversary, baptism, and birthday parties, Zora believes their secret to success was keeping loyal customers coming back. “We want to thank all of our customers, suppliers and employees,” states Zora. “We didn’t make a lot of money, but we made a lot of friends.” The Popadics have purchased a home in South Windsor and plan on spending their time babysitting five grandchildren and travelling. Meanwhile, there are no known restaurants specializing in Eastern European cuisine left in the city. She’s BACK! Joan Charette has rejoined the Walkerville Business Improvement Association (WBIA) as Events Coordinator, some 20 months after stepping down as WBIA coordinator. “Some members (of the BIA) asked me to come back just as Events Co-ordinator,” says Charette, who held the position of coordinator of the BIA for 16 years. She accepted the scaled down duties, she says, “because putting on events was my favourite part of the job and I feel there is unfinished business there.” Charette has a lot of ideas for enhancing existing events such as the “Holiday Walk” in November and the “Art Walk” in July, as well as launching new events. Other coordinator duties, such as promotion, advertising, website management and taking minutes at meetings will be handled by various BIA members. “The board has strong members, the committees are well organized and that helps a lot,” she indicates. Plans by Henry Tam to rejuvenate three Chatham Street buildings in downtown Windsor are still on track, although progress is not as swift as the impatient Toronto-based developer would like, says his RE/MAX

Capital Inc. Real Estate Agent Jim Williams. Last May, after sorting out some permit red tape issues at City Hall, Tam ruminated publicly that a food court on the bottom floor of the former Loop, 156 Chatham Street West, could be operational in four months. Williams says next spring is a more reasonable time frame, but 12 residential lofts on the second floor could be ready for occupancy a number of months earlier. Tam workers have gutted the upstairs, where a nightclub once operated, and prepped it for a full conversion to a mix of one and two-bedroom apartments. City permits for the major renovation were expected to be released in mid-September. Similar upper floor transformations are under way at Tam’s two other Chatham Street properties, the former Pour House, and the former Plunkett’s. Ten lofts are planned for the old Pour House, and three for Plunkett’s. Williams is looking for tenants on the bottom floors. Plunkett’s could be a full-blown restaurant or converted to retail or medical clinic use. The former Pour House could accommodate two small retailers. Williams will also be looking for vendors to occupy the food court, which would cater to college and university students, hundreds more who will be nearby with the opening of University of Windsor campuses. Asked why the Loop building was still listed for sale at $2.2 million in mid-September, Williams said the posting was outdated, harking back six months earlier when Tam loudly declared his displeasure with “anti-business” bureaucratic foot-dragging. Talk about mixed signals! On August 28, Windsor Star published a front page story quoting new WindsorEssex Economic Development Corporation CEO Stephen MacKenzie saying the region’s reputation as a militant labour beachhead is a dated perception. Right beside that article by Grace Macaluso was a story by the same reporter heralding an overwhelming vote to strike by Windsor Ford and Fiat Chrysler Automobiles (FCA) workers. “Ford, FCA workers vote to support strike,” blared the headline. “When you’re going down the list of factors that are important to business and potential investors, a high union profile is a concern,” MacKenzie told Macaluso. Little wonder the perception remains hard to shake.